Gov. Chris Christie’s message to the Conservative Political Action Conference (CPAC) on Thursday just outside of Washington, D.C. was direct: Republicans have the best opportunity to win policy battles not in the nation’s capital, but in state politics.

“We’ve got to start talking about what we’re for, and not what we’re against,” Christie said. “Our ideas are better than their ideas, and that’s what we have to stand up for.”

Christie cited the impact made by the Republican governors of Wisconsin, Michigan, Ohio and Florida when making the argument that state governments now move policy initiatives forward more effectively than the federal government.

Christie’s popularity might have seriously plunged in recent polls, but New Jersey’s Republican governor, embattled by the Bridgegate scandal and a state investigation of Sandy aid policies, looked homeward to his home state as he stood again in the national spotlight.

“We put together a plan [for state pension and benefit reform] to do the things that they should be doing here in Washington, D.C.,” Christie said. “After we proposed this, you can imagine that I was extraordinary popular with the public employees’ unions.

“You may hate me now, but ten years from now, after I’ve made the changes that need to be made and you’re collecting your pensions, you’ll be looking for my address on the Internet to send me a thank you note for saving your retirement for you and your families,” Christie added, referring to an appearance he made at a New Jersey firefighters’ convention after he proposed his pension and benefit reform plan, which ultimately passed. “I walked off the stage, and two thirds of the audience was cheering.”

“Truthfully, we rarely see Governor Christie because he has taken up residence in a state of denial, where he caters to conservative donors on behalf of Republicans in other states,” Currie said. “If he cared about New Jersey, he would be addressing the problems affecting middle class families, many of which he created, and answering questions about the scandals engulfing his office,” Chairman Currie said. “Instead, he brazenly repackages his record into something that bears little resemblance to the truth.”

“The fact is, the Christie administration let down the survivors of Superstorm Sandy, drove business out of New Jersey, undermined women’s health care services, and blocked meaningful reforms for raising the minimum wage, ensuring equal opportunity for all, and keeping our neighborhoods safe,” the chairman added. “Meanwhile, his senior political appointees were endangering commuters and badly abusing the power and trust of Garden Staters. It’s embarrassing that the governor wants to export his failed approach to public service, and curious that conservatives would even allow him on their stage. Three months after the so-called Bridgegate scandal flared, Governor Christie still does not show a hint of concern that senior members of his administration put politics ahead of public safety — an issue that he brushes off as “a distraction.” 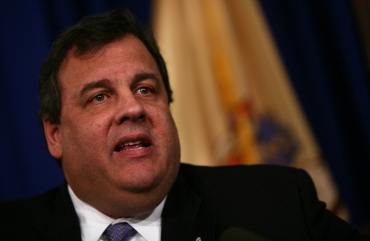