The baked goods equivalent of Dr. Frankenstein and creator of the CroNut unveiled his latest creation at Austin’s South by Southwest — the chocolate-chip-cookie milk shot. And it is coming to Mr. Ansel’s New York bakery.

To be clear, these are shot glasses made of cookie, filled with organic milk. Just look at them. Look at them and despair for your waistline.

“In France, we don’t naturally think about drinking milk with cookies,” Mr. Ansel told Fast Company. “We don’t eat very many cookies at all. So the first time someone told me milk and cookies are a ‘thing,’ I was very fascinated by it. And that’s what inspired the creation.”

The cookie-cup hybrid has already caused the internet to explode, as expected.

This is the last thing I’ll ever need to be happy http://t.co/TOXmwyB7DO

Where will the Franken-Foods end? What is next for New York  after the Cronut, the vegan Donart and now this? What happens if you put a Cronut on top of a Donart and dip it into a cookie shot glass? 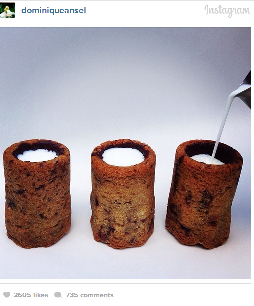