With political consultant David Axelrod leading the conversation, the group acted like a lineup of old friends, ribbing each other over recent weather woes, and joining together to herald the role of cities and criticize the federal government’s lack of investment in them.

The new mayor has also been working to expand his profile, with several recent appearances on national television, in addition to Thursday’s trip to the University of Chicago.

“There is something electric about this type of work,” he told the crowd yesterday, describing the benefits of being a mayor, “when you can have a vision, put it before the people, get it ratified by the people and then, like a bat out of hell, go and act on it.”

“There is something energizing, captivating about being a mayor and just the amount you get done in a single day,” he added. “Sometimes–I’m sure you’ve all had the experience–at the end of the day you look back and what you got done in a day that would have taken months in another setting. And that alone makes it inspirational.”

The group spent much of the time touting initiates in their respective towns, pressing the importance of cities as the engines of economic growth in the country and urging the federal government to offer more investment and support.

“The future of this country lives and dies by the cities,” said Mr. de Blasio.

”We can’t throw up our hands and we can’t curse the darkness. We have to change the politics in Washington. I believe there’s a way all of us working together can start to change that,” he said, urging his fellow mayors to organize–like his predecessor, Michael Bloomberg, did on guns–to lobby for new investments in infrastructure for cities.

Mr. de Blasio was also pressed on education, including the city’s escalating debate over charter schools, and lamented the charged politics of the education debate, where the teachers’ union, charter school advocates and other stakeholders often propel issues into charged and lengthy showdowns.

“Our job is to transcend  the politics,” he told the panel. “Sometimes we have to blow by the politics and reframe the discussion, … cut through that and come up with things on the ground that actually work. And then it’s a little bit of if you build it, they will come.”

“It’s our job to transcend the politics, in some ways bluntly to ignore the politics and gets this discussion to a healthy place,” he added, drawing a skeptical eyebrow raise from Mr. Axelrod.

“I am comforted by your relentless optimism,” said Mr. Axelrod. “It’s just–the rubber hits the road at some point and the details become a little more vexing than simply joining hands and sharing a vision when it gets down to issues like contracts and rules.”

As he tried to wrap up, Mr. Axelrod noted Mr. de Blasio had to make a flight that night–and offered another subtle jab.

“I don’t want you to have to speed to get to the airport,” he joked, referencing the recent mini-scandal that emerged after the mayor’s motorcade was caught speeding and zipping through stop signs days after rolling out a traffic safety plan.

“We’re not speeding,” the mayor assured.

But Mr. Emanuel quickly jumped in. “Since our speed cameras put the money [from speed tickets] into early childhood [education], go ahead,” he joked, then reached over to fist-bump his rival mayor from New York.

“It would be a patriotic act,” Mr. de Blasio concluded. 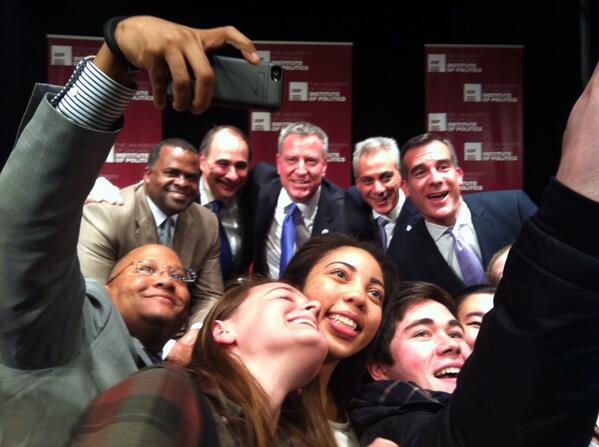