Mayor Bill de Blasio, who will be skipping today’s St. Patrick’s Day Parade along Fifth Avenue to protest its policy of excluding openly gay groups, welcomed Irish leaders to Gracie Mansion this morning, where he did his best to smooth relations that have gotten off to a rocky start.

The New York Times reported this weekend that in his two-and-a-half months in office, Mr. de Blasio has managed to repeatedly slight some Irish New Yokers, earning harsh editorials in community newspapers and other complaints from critics.

“After repeated inquiries,” they said, “the mayor’s office announced that it would hold the breakfast, on Monday, albeit with fewer attendees than in recent years.”

Indeed, this morning’s event had the feel of an olive branch, with Mr. de Blasio repeatedly praising the Irish heritage of the city to the crowd, which included unions leaders and the prime minister of the Republic of Ireland, whom the mayor will meet later today at City Hall.

“I want to welcome you all. And I want you to know we have to celebrate here in the people’s house because the people of this city, the history of this city, has been so strengthened, so elevated by the presence of Irish-Americans, now over centuries,” Mr. de Blasio told them. “One of the truly foundational communities of this city, of everything we know New York City to be, is the Irish-American community.”

He noted the fact that this morning’s event was one of the first cultural celebrations his administration had organized at Gracie Mansion.

“The reality is that our Irish-American roots are so strong. The resiliency of this city is in no small measure due to the resiliency inherent in the Irish people. The artistry, culture, the creativity of this city–as you could see earlier with the beautiful music you heard–all of this has become a part of the DNA of New York City and all for the better,” he continued. “In this city of immigrants, we never forget where we come from. We never forget our origins that make us strong. We never forget our ancestors.”

He ended with a toast to the “good looks” of the Irish people–and was praised in return by the prime minister, Taoiseach Enda Kenny, who commended the mayor for peppering his speech with Irish words.

“First of all, Mr. Mayor, let me give you 9.5 out of ten,” he joked, before turning to a more serious tone.

“Rest assured that the Irish community here in New York City will work with you,” he told the mayor. “Thank you Bill for continuing this great tradition here at Gracie Mansions. And the Irish will not forget you for this.”

Mr. de Blasio then proceeded to present a glass apple to the prime minister–but not before dropping it first, causing a loud thud.

“The apple is whole,” he said, after quickly recovering. “The apple has landed.”

Brian O’Dwyer, a lawyer and activist who was quoted in the Times story complaining about Mr. de Blasio’s “total inexperience,” introduced the mayor and praised him for his stance on immigration.

“We stand here today at the cusp of this new administration, supremely confident that the immigrants in our midst–Irish and non-Irish, documented and undocumented–will be nurtured and cherished,” he said, adding that the friendship between the new mayor and the Irish community “is both real and enduring.” 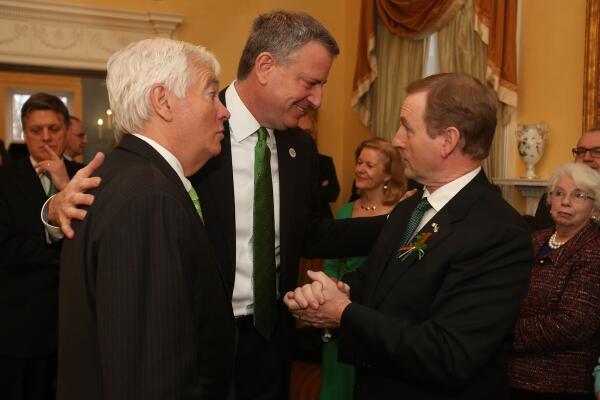