Mayor Bill de Blasio and his new parks commissioner today threw their weight behind the idea of getting wealthy, privately-funded parks conservancies to help subsidize parks with less green–but stopped short of endorsing making such an arrangement mandatory.

State Senator Daniel Squadron–who was in attendance at today’s announcement–has proposed controversial legislation that would require big-money nonprofits, like the Central Park Conservancy, to donate twenty percent of their contributions to a “Neighborhood Parks Alliance,” which would then redistribute the money to underfunded parks, often clustered in the outer boroughs. The proposal has been met with fury from some parks advocates, who have questioned the legality of a potential mandate.

Mr. de Blasio endorsed the proposal as a mayoral candidate, but today insisted that he and his team had not made up their minds and would work with the city’s conservancies to come up with a plan for addressing what he described as unacceptable inequities in parks funding.

“I think it is an important and promising idea. I’ve said all along, we have to recognize inequalities in our parks, like so many other parts of life in New York City and we have to address them,” said Mr. de Blasio, speaking to reporters after appointing his new parks commissioner. “I can tell you what I don’t like: I don’t like the status quo. I don’t like the notion there’s a lot of parks in our city in less advantaged neighborhoods that aren’t dong well; the parks aren’t those clean, safe spaces we want them to be. And we have to find way to address that.

He called Mr. Squadron’s plan “a very productive and creative idea,” but cautioned, “How you specifically engineer something like that, it has to be worked on with the stakeholders involved.”

He also suggested he was open to a model that might be voluntary, arguing that people who contribute to one park may be open to contributing to others.

“I think a lot of people are excited at that opportunity to help and to be part of another neighborhood, too. And that’s the direction we want to go in,” he said.

The mayor’s new parks commissioner, Mitch Silver, said he agreed with the mayor. “The status quo is not working,” he said

“There are probably many ways to get there,” he added. “But I think we can all agree that to have a successful parks system in our city, it has to be a great parks system throughout the entire city.”

With reporting by Ross Barkan. 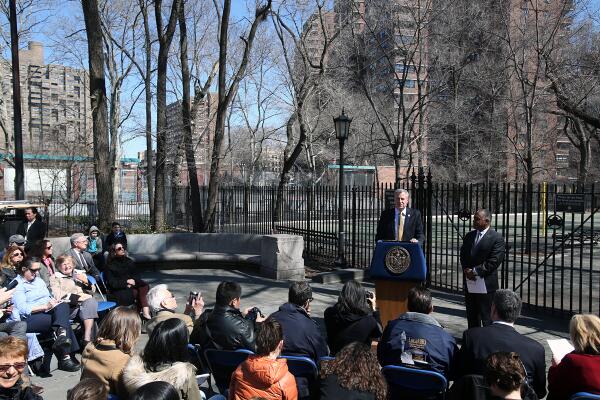