Standing in front of his mother’s Staten Island home with dozens of supporters, Mr. Recchia, a Democrat and former Brooklyn councilman, made clear his playbook for his uphill challenge against Mr. Grimm: slam the Republican for his party’s perceived intransigence and highlight Mr. Grimm’s personal imbroglios.

“I won’t be going to Washington to carry water for my party. I’ll be caring for the hopes and dreams of the people I’m there to represent–you,” Mr. Recchia told the crowd. “I’ll make you one more promise: I will continue to conduct myself honorably because my mom wouldn’t have it any other way. We all know that Mr. Grimm can be a little pugnacious.”

Mr. Grimm, of course, has been reeling from a string of recent controversies, including a federal probe into his fund-raising and an incident in January in which he threatened to throw a NY1 reporter off a balcony in Washington for asking about the reported investigation.

“Well, starting now he has to pick on somebody his own size,” Mr. Recchia said.

Much of the local Democratic establishment turned out for Mr. Recchia’s kickoff. Lawmakers from Staten Island and Brooklyn (the district spans all of Staten Island and a chunk of southern Brooklyn) spoke on Mr. Recchia’s behalf, including Congressman Jerry Nadler, State Senator Diane Savino and Mr. Grimm’s predecessor, Democrat Michael McMahon. The sharpest barbs for Mr. Grimm came from Mr. Recchia’s surrogates.

“I don’t like being part of the delegation that’s laughed at, they say, ‘Oh New York, oh hey you got that character, that nutcase Grimm.’ We don’t need that,” Mr. Nadler said. “There are Republicans who I disagree with in the New York delegation but who I respect. But nobody respects Grimm. Nobody intelligent can respect Grimm.”

Mr. Recchia is looking to ride the demographic and ideological shifts underway in the traditionally Republican borough. While a Republican mayoral candidate won the borough in last year’s general election, President Barack Obama eked out a victory there two years ago. Left-leaning, minority voters are also increasingly populating Staten Island’s north shore, where Democrats like Mr. Recchia have performed well.

But unseating Mr. Grimm will not be easy. He survived a Democratic challenge in 2012 and remains relatively popular on Staten Island, where Brooklyn-based candidates have repeatedly failed. The telegenic Mr. Grimm, an ex-FBI agent and marine, remains a strong campaigner who will be more than willing to parry Mr. Recchia’s attacks.

To highlight his Staten Island ties, Mr. Recchia chose his mother’s house as a setting for his kickoff and noted that his three daughters had been born in the borough. He hardly mentioned that he spent his entire life in a Brooklyn neighborhood across the bridge.

“This is my mother’s house. I am my mother’s son,” Mr. Recchia said. “I’m announcing my campaign for congress right here because this is who I am.”

Mr. Grimm did not immediately respond to a request for comment. 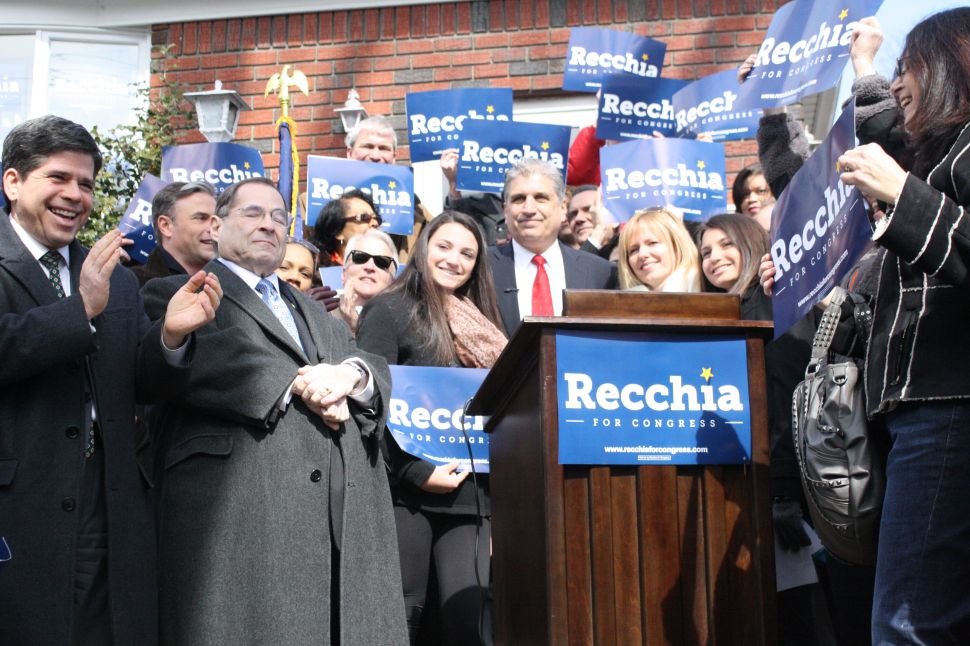