It was yet another average wintry day on the Upper East Side navigating the onyx, iced streets.

“I feel like I’m living in East Germany or Moscow,” a Wall Street friend said, taking a spoonful of anemic chicken noodle soup and saltine crackers at a local diner ($5.90) because it was too frigid to venture East of Lexington.

“This weather really has me down,” he shivered, wrapped in a khaki wool coat and a Russian-style military hat. “And then you realize you’re out of favor and that everyone hates you,” he complained.

“How can you say that?” I asked in disbelief. “Who hates you?”

“Them,” he shivered, eating the lonely saltine left in the cellophane wrapper, crumbs pouring onto his rough, woolen trousers. “We used to run this town. Now I feel like they want to run us all out.”

“Don’t you think you’re being a tad paranoid?” I said.

“You’re in the ad business. Remember that commercial ‘Don’t Hate Me Because I’m Beautiful’?”

It is not entirely untrue that living near the former mayor had its advantages: sidewalk heaters for the attending police, oversize chocolate bar giveaways for children during Halloween, swift snow and garbage removal, streets salted like cured gravlax.

In the new order of things, the point has been driven home that those who live on the Upper East Side are no more important—perhaps even less than our friends in the outer boroughs.

While people still love New York, there is a growing sentiment that some people aren’t liking it very much anymore. While New Yorkers from all sectors embrace cultural and financial diversity, all this labeling of the have-mores and the have-nots has started to stir uneasy divisions.

“As soon as my last daughter is out of the house, I am sooo out of here,” the silver fox whispered, as if hatching a prison break. We were having espresso after a workout at his Fifth Avenue penthouse, which is central to our workout group, dubbed the Fifth Avenue Seals.

“But where will you go?” I wailed, bereft over the thought of losing a dear friend to warmer climes, along with his penthouse gym with 360-degree views. It was almost too much to bear.

“Malibu. Everyone I talk to wants to move, buy a house, hike in the mountains in February,” he said.

“Is it that bad?” I asked. “Isn’t New York the greatest city in the world?”

“It is, was. But people I know are looking for an exit strategy,” he said taking a shot of ginger fireball with an e-boost chaser from Juice Press. “Malibu sounds beautiful this time of year, as does Miami.”

“What about all those wealthy foreigners buying $80 million apartments on 57th Street?” I asked.

“Don’t you understand? They don’t live here. It will be like Kensington in London, where you pass by one of the prime residential buildings and no one is home. It’s going to become a high-priced insurance policy for unstable regimes.”

“Isn’t that cool though?”

“You’re just an optimist and a dyed-in-the-wool New Yorker.  It’s not a Woody Allen movie anymore. It’s Moscow on the Hudson.”

“These days, I have to wear a reversible fur when I go downtown,” one of the queens of couture sighed with disbelief, knocking back a cosmopolitan at an uptown hotel bar. I was early for a business dinner at the overpriced and underwhelming restaurant (I wasn’t the one to make the reservation). Another evening of appalling service and undercooked chicken, I thought as I ran into Madame Couture, clad in chinchilla.

“I mean, the very fact that I would be jeered at and pilloried in my own backyard for wearing a sheared dyed mink,” she droned on. “Well it’s just unconscionable. I don’t jeer at them for not showering and shaving and wearing patchouli oil, which I find equally offensive.”

“Now, now. Can’t we all make an effort to get along in this great city?’ I chided her.

“Maybe you should try and be a bit more likeable?” I offered.

“Such as?” she asked dryly.

“I think I see pleather in your future,” I said.

“Fabrizio,” she said, grabbing a nearby Milanese acquaintance. “My friend Richard here thinks I should give up fur. Why do all Euros get away with it?”

“I’ll take you to Milano, Bella,” Fabrizio said, taking in her chinchilla-and-diamond ensemble so cartoonishly that I was waiting for his eyes to turn into dollar signs.

“I need to get out of NYC. It used to be good, but now there are no men for me here,” she wailed.

“I think Fabrizio cuts a bella figura and would show you a great time in Europe,” I whispered. “But according to the year of his shoes, you would be footing the hotel bill.”

“If my ex can run off with his sexretary, I can have a little Fabrizio,” she purred. “And you and that wife of yours, you’ll stay to the bitter end, won’t you? Come to Milano!”

“With you and Fabrizio? I don’t think so,” I said.

“You’re such a bore,” she said, turning to her friend to discuss the suite at the Principe di Savoia.

“Miami is the new New York,” the
financial whiz said over velvety gnocchi at the sublime Topping Rose House in Bridgehampton. It was yet an another evening when any sane person would have been under down quilts, but in true Siberian fashion, the restaurant and bar were packed to the gills with Hamptons residents gone stir crazy.

My friend was going on about the virtues of Miami’s cultural and restaurant scenes—and absence of a state income tax.

“Who says I have to live here?” he said. “I mean seriously. First it was Occupy Wall Street. Now it’s a tale of two cities,” he said. “All I do is work 23 hours a day, provide the tax base and make donations to every charity, and suddenly I’m maligned. Who says I need to be here when I can be living in Miami, with no state income tax, rollerblading with Brazilian supermodels in string bikinis?”

“Don’t be rude!” his wife smacked him lightly.

“Don’t worry. I’ll get you a South American workout instructor with a six-pack and tattoos, and you’ll be thanking me,” he shrugged. “That’s the amazing part. They think we need to be here. We don’t. I can be anywhere, and I can bring my firm and my jobs with me. Why do I have to be here?”

“Well, here’s to your new motto: Rollerblading for all!” I lifted my glass.

“Rollerblading for all,” my friend responded enthusiastically.

In a dreary, gray and depressing morning, I braved the crowds at J.F.K. Airport for a two-day jaunt to Jamaica for a respite at my rum partner’s island paradise, the fabled Goldeneye.

As we strode out on our villa porch, Chris waved and swam to us in the lagoon, his eyes translucent against the brilliant aqua . Over the next 48 hours, off came the coat, gloves and other winter defenses. Eighty-five degrees of paradise beckoned, and New York seemed like a distant, thawing memory.

“When you are in your 20s, 30s and 40s, there is no better place to be than New York,” Chris mused as we caught up over our Goldeneyes (Blackwell Rum, lime juice and simple syrup), glorious jerk chicken and chutney at the chic, seaside Bizot Bar.

“The buildings make one feel small and insignificant, therefore inspiring you and  helping you to succeed. These days, I spend most of my time in Jamaica. I get a lot back now from being in a natural environment: trees, birds, an abundance of fresh fruits. Jamaica has that in spades,” he said.

With homes in Jamaica, London and New York, Chris makes trips to New York but only for a few days at a time to get things done—an enviable schedule.

As I strode in naked from the steaming outdoor shower (under a palm tree), my iPhone buzzed with a message that my flight to New York, the next day, was canceled due to yet another impending snowstorm threatening the Northeast and closing all the airports.

We had to get back before the storm, or we could possibly be stranded four or five more days. Suddenly, what seemed like a luxuriating idyll turned to forced exile. I missed the black snow and the sky-high garbage bags. I missed my diner tuna and fighting my way through the espresso bar in the frigid mornings. How would I make my meetings, appointments, getting the kids off to school, running on neurotic energy?

I called my assistant, my travel agent, the hotel concierge and the airlines. “Book us on any flight. We have to get back,” I screamed into the phone.

Even while everyone I know seems to be plotting an escape, I needed a hit of my one true addiction: the Frozen Apple.

It didn’t matter that it was a tale of two cities. I had to get back to both.

Richard Kirshenbaum is the CEO of his new venture, NSG/SWAT. He is also the author of a memoir, Madboy, and a relationship book for women, Closing the Deal. 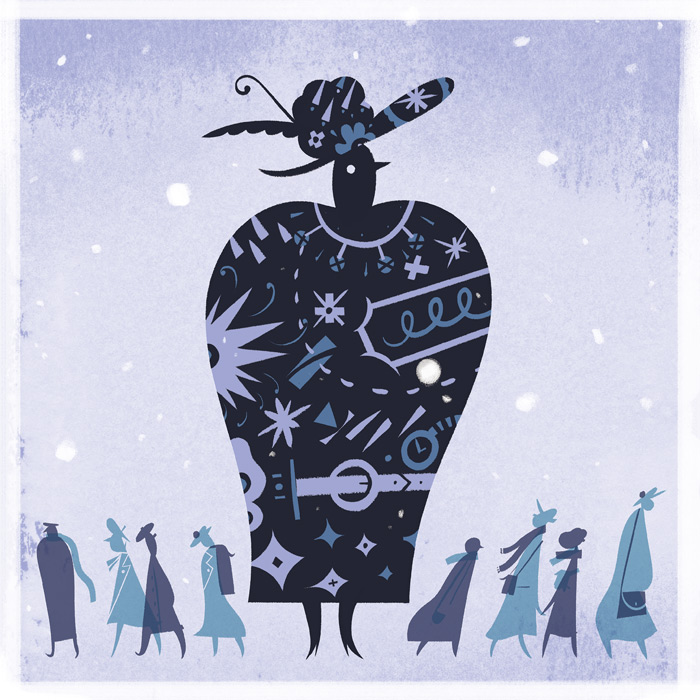