Looks like New Jersey prefers to sweat it out on the streets.

Dove will drop the controversial billboard that referred to the state as the “Armpit of America” from its  advertising campaign after protests from residents.

The ad was supposed to encourage flaunting the armpit rather than being embarrassed by it. However, many from the Garden State took it as a slight on their beloved home.

Dozens of people wrote on Dove’s Facebook page to express their anger.  “How dare you post such a rude, degrading and ignorant post about NJ as the ‘armpit,’” user Diane Marie wrote in a characteristic post.  “You are rude and I will never buy your products. You owe us all a huge apology.”

Dove commented on each post about New Jersey with the same statement:

“Thank you for your comments. With our ‘Dear New Jersey’ advertisement, Dove Deodorant never intended to upset the residents of the state. As a result of your feedback, Dove Deodorant will not be moving forward with publishing or displaying this ad.”

Matthew McCarthy, senior marketing director of antiperspirants and deodorants at Unilever, Dove’s parent company, tried to explain the failed reasoning behind the ad.

“Our intent with the ‘Dear New Jersey’ ad was to call attention to the fact that armpits can and should be considered beautiful ask women everywhere to accept this as something that is OK,” Mr. McCarthy told the New York Times. 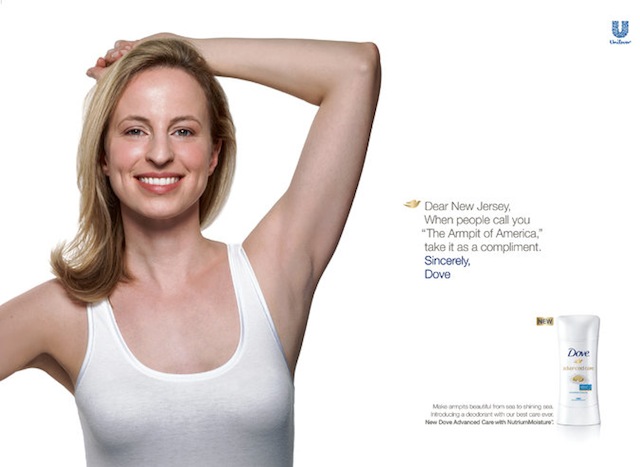