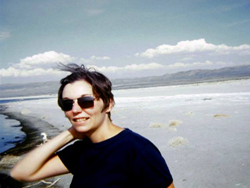 Nancy Holt, the pioneering artist who died early last month at the age of 75, will be honored with a day-long tribute at Electronic Arts Intermix on Saturday, April 5. The Chelsea venue, located at 535 West 22nd Street, is screening 12 video works by Holt that span 45 years of her career.

The screenings will begin at noon with two films Holt made in collaboration with her husband, the late land artist Robert Smithson: Swamp (1971) and the humorous East Coast, West Coast (1969), in which Holt plays the abstract, East Coast conceptual artist to Smithson’s spacey California emigre. Holt’s final work, The Making of Amarillo Ramp (2013), will be among the other films screened that afternoon. Ramp, which documents the creation of Smithson’s monumental Texas earthwork, is composed of 16mm footage shot on a Bolex camera in 1973 that Holt finished editing shortly before she died in New York. Smithson was killed in a plane crash before the ramp was completed, but Holt and other artists, including Richard Serra, finished it together. (Look for dealer Tony Shafrazi driving a tractor along the ramp, depositing rocks).

A full schedule for the day is available here.