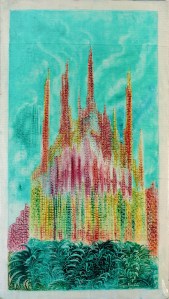 Eugene von Bruenchenhein sparkles like the light of natural reason. This gorgeously punctuated and interwoven show includes the late Milwaukee obsessive’s psychedelically messianic oil paintings of glass towers and aquatic jungle flora; his black-and-white photos of his wife, Marie, as muse, maid, pinup, friend and model, and St. Sebastian; and the devastating vases, built up in extraordinary, barbarous precision from handpinched leafy petals of clay he dug up himself that he fired in his stove at home. Five slender red steeples, in Steel-Imperial City, June 1978, flick up into a cloudy blue sky like Chinese yo-yos or astral Empire States out of a mound of snaky lower structures in yellow, green and blue. The windowless peaks, which the artist shaped and marked directly with his fingers, shimmer with scaly surfaces that are alternately transparent and opaque. Sitting on dark fabric against a white wall in Untitled (Marie seated on floor, ruffled stockings, pearls, wonderful shadow), with straight bangs, wavy hair framing her face and the pearls draped across her shoulders like a pagan breastplate, von Bruenchenhein’s muse looks up and to the right, innocent, strange and hopeful. In Untitled (Marie with lace top and black bow tie, one arm awkward on lap, hair up), boxed in tightly but with her candidly perfect composition hard to make out against a bold floral-print background, she looks directly into the camera. But in the former, because she averts her eyes, we can feel as if we’re participating in the playful exchange; in the latter, her loving gaze pushes the viewer out of the marital intimacy even as it reveals it. The vases, gourd-shaped, with pinched necks and flaring mouths, occasionally closed but more often a kind of patched open work (they could only hold dried flowers), and usually left a natural brown but sometimes painted coppery green or a flaky, fragile gold, create a tantalizing sense of fuzzy exactitude, like a delicate grid being implied, not shown.