Johnnie Walker had to drown its sorrows on Friday, when it got slapped with a lawsuit for a special “Explorers Club” line launched in late 2012.

The plaintiffs in the cease and desist order—the original, 120-year old Explorers Club from Manhattan—demanded the British liquor company Diageo had to stop selling its Spice Road, Gold Route and Royal Route blends, or else pay licensing fees.

Headquartered at a Jacobean townhouse on East 70th Street, the non-profit organization counts among its members some pioneers in land, air, sea and even space travel, including L. Ron Hubbard, Edmund Hillary, and Neil Armstrong.

The group’s current members contend that the whisky label uses a font that is “confusingly similar” to theirs, and airport tasting kiosks that evoke the wood paneling, beamed ceilings and standing globe of their clubhouse. If that wasn’t enough, court papers noted that a sales rep at one of the duty-free stores carrying the whiskey said that it was made at the NYC club, according to the Post.

So far, Diageo hasn’t responded for comment, but has taken down any mention of the contested line from its website. Guess they’re taking a hike. 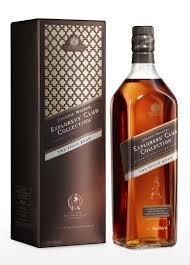