TRENTON – Despite all characterizations to the contrary, the question going into this first encounter in the mayor’s contest was how long it would take before someone threw an elbow at perceived frontrunner Eric Jackson, director of Public Works for the City of Plainfield.

“This is a forum, not a debate,” the reverend emcee implored as much as announced over groans in the crowd where at least one audience member in the front row described sitting in a “ringside seat.”

Yet under the manners and genteel trappings, complete with an English accented moderator from the League of Women Voters, urgency abided in this standing room only crowd of West Ward residents.

The city’s sitting mayor, after all, is heading to prison on federal corruption charges.

With the stench of the sitting administration wafting through the high-ceilinged room at Lighthouse Outreach Ministries and Jackson race-walking to victory to succeed the guilty but City Hall-intransigent Mayor Tony Mack, at least according to powerful insiders attached to Jackson’s candidacy – Leggett started with a subtle jab on the heels of his rival’s answer to a housing and development question.

“Developers are poised to come but they won’t come until there’s ethical transparent leadership in Trenton,” said Jackson, who had appeared fashionably late for the forum, making the other candidates wait and getting them to hover at the edge of a glowering rage just before he alighted at the front of the room, diffusing tensions with an electric full wattage grin.

“I will be that servant leader,” he declared, noting parking lots “this governor is primed to allow development on.

“It is about relationships,” Jackson added. “I have begun building those relationships across the state. There won’t be any cronyism or any scenarios where I won’t be held to the highest level of integrity. We will restore trust and competency to City Hall.”

“The most important thing is you have to have a city where people want to come and invest,” said the former housing authority head, who didn’t hear any contradictions in the packed crowd when he described himself as an aggressive, hands-on manager. “We need to clean this town up and make it a place where people want to come and set their business up.

“You don’t chase the girl,” he added. “You get ready for the girl to chase you.”

The remark provoked a sudden guffaw from women and roar of approval from men, as the candidate reseated himself, content at least to have kicked up a friendly battle of the sexes in simultaneously trying to refute Jackson.

Later, Mercer County Deputy Clerk Walker Worthy – who last week assembled a roomful of county elected in support of his candidacy – battered the others for not having any record of swerving on a nonprofit, appearing to direct his ire at the upper echelons of the field.

He wants jobs in the city as a way to crack down on crime because “no one steals a car on the way to work.”

When he mentioned casino development on the waterfront, the comment prompted some whispered disgust and distrust.

Twenty years in the U.S. Army, Paul Perez, a Trenton native – a fact he leaned on throughout the two-hour event to make people rummage through the biographies of others in the race to itemize those who don’t, by contrast, hail from Trenton – rose to make his closing statement.

It proved a dramatic moment as the candidate strove to connect, acknowledging the community’s collective failure to provide adequate lives to Trenton’s children and failing the cause of civil rights.

A combat veteran and the only Latino in the contest, Perez told the crowd, “This city has been hurting for too long. We’ve got to get this right. We make to make a true assessment. I was born here and I can come back here when I want to. It’s in my DNA. I am Trenton.”

Leggett rose with a quick quip.

“I ‘is’ Trenton,” he cracked, providing another send-up of laughs before solemnly recalling his four and a half years on the city council as the only minority.

If Leggett was scoring points and had at least one insider flashing a big thumbs at PolitickerNJ up across the room, Golden, a former city police director and Philadelphia native, tried to position himself as the most consistently serious alternative to Jackson.

In the front row and staunchly in Golden’s corner sat John Harmon, president and CEO of the National Black Chamber of Commerce and a former unsuccessful candidate for mayor.

“There are people who want to dust off the old playbook,” the candidate told the crowd. “It’s not going to work, folks. We need leadership.”

“A mentor of mine early in my police career reminded me that little things when left unchallenged become big things,” said the lifelong cop, who vowed to instill a “taxpayer-comes-first mentality and “unencumbered leadership,” and who wants to put 50 more cops on the city’s crime-filled streets.

“This is a very engaged community here tonight. Unfortunately we have not seen this level of engagement for some time,” added Golden, whose campaign had the most visible presence on the sidewalk in front of the building prior to the event, waving signs and chanting his name.

As the candidates cleared afterwards and the crowd emptied with less than two months remaining in the contest to succeed the disgraced Mack, there appeared to be considerable room for more debate, and more public consideration of Trenton’s underlying urgency. 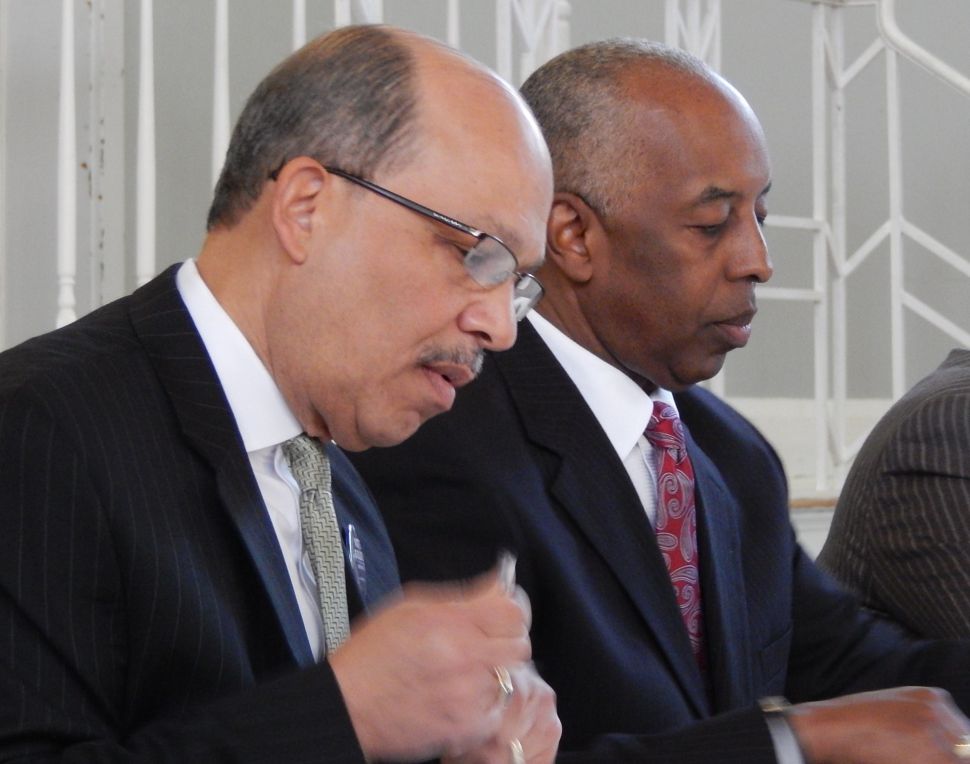