1. Last night’s episode seemed like something from the Tonight On Girls parody Twitter account: Hannah gets into Iowa! Marnie realizes her true life’s purpose as a homewrecker! Jessa assists a suicide!

Out of all the trajectories that our main characters have taken this season, whose actions this episode seemed the least likely, given what we know about their characters? Whose decisions were the most plausible?

The award for least plausible has to go to Jessa. I know we’re supposed to think that her path from rehab to addiction to misery/sobriety has changed her and started to chip away at that calcified barrier she’s built between herself and the world, etc. But I don’t buy it. Maybe if we’d seen her doing something nice for someone between rock-bottom and now, but to skip directly to helping an old lady commit suicide? It’s too extreme and so doesn’t jibe with Jessa’s personality. How many short weeks ago was it that she was trying to keep her drug buddy on drugs and away from his loving daughter? We’re supposed to just buy that sobriety bought her empathy as well? Nope. What we’re seeing isn’t so much personal growth as it is plot development.

Most plausible is a toss-up. Shosh hasn’t been given a lot to do this season, but what she has done has obviously prepared her for this moment of despair. And it is totally consistent for her to confuse that for love. Hannah may be acting in unusual ways, but it’s all just the flip side of her regular anxious self-centered persona, just focused outward instead, creating anxiety in those around her. But the edge here has to  go to Marnie. She lives for this shit. Every aspect of her life has been heading to this storyline. So much drama-baiting! Marnie lives her whole life like she got a starring role in a play in third grade and then just forgot to get off the stage forever. When Clementine confronts her, Marnie does her sad face, but she can barely hide how much she loves even this stage of the whole thing. It’s like she is actually enjoying being chewed out. Because it’s all part of the delicious, delicious drama, and she’s still the star.
2. Shoshanna is feeling what it’s like to have a Marnie Moment: Despite all her high-strung, Type-A planning, she’s not going to graduate, not going to get the guy, and has been reduced to literally begging Ray to get back together with her. But while its clear her year of experimentation and “finding herself” has left her only more world-weary and hostile, do we as viewers have any clearer sense of what Shoshanna thinks her life SHOULD be? What was she majoring in, anyway? Can you describe Shosh’s vision board for her post-collegiate life?
Isn’t a vision board just like a bunch of magazine cutouts picturing what you want? So hers, presumably, would be all the glamour stuff she imagines a glitzy New York life is. Remember, this is the girl who was raised by Sex in the City: shoes, cocktails, men with expensive haircuts. Whether she still wants that is in question. Clearly she no longer has any idea what she wants. Or how she would go about getting it. I think her original plan was to study a bunch of stuff in college until that glamorous life magically opened itself up to her.
I mean, seriously, are we really supposed to believe that there is a course at NYU specifically on glaciology (the study of glaciers), and that if there is, that Shoshanna would be taking it? Is she an environmental science major?
More likely, GIRLS wants us to think of this as a metaphor: The icy exterior that Shosh has put up this season is finally melting, and beneath it is this frightened child. But did we really believe the icy approach for a second? She just semeed like the same old Shosh, only doing more annoying things. Even her glaciology professor knew that she was bad at ice.
3. In Hannah’s happiness in getting into Iowa, she’s become benevolent. Suddenly, she understands (nay, is inspired) by her boyfriend’s choice to all but cut her out of his life so he could concentrate on his art. She’s willing to forgive Marnie’s transgressions so she has a best friend to share her news with. She’s even made her parents proud (for like, the first time ever). But is this new go-with-the-flow, “Just figure it out” Hannah for real? There’s definitely something undermine-y about telling Adam about her moving away to grad school moments before his Broadway debut. And for as “proud” of him as she is, she can’t seem to stay awake for the actual show. Do we actually believe she didn’t mean to sabotage his performance?
Not even for a second. From the second she reads her acceptance letter, Hannah knows that she is going to go to Iowa, no matter how many times she protests that she hasn’t decided. And on some level she must know that this will mean breaking up with Adam. (In case that wasn’t clear from her actions, she rips the damned letter in half, signifying rupture, before she even reads it.) So yes, she wants to instigate a fight. One that she can reasonably tell herself she is on the right side of and didn’t see coming. But come on: this is a guy who needed so much mental space for his role that he moved out of the house, and you’re filling his mind with a totally out-of-the-blue development in your relationship, right before he goes onstage? Either she is literally the world’s worst judge of people and their reactions—which does not bode well for her future as a writer—or, more likely, she knows exactly what she’s doing. Her gleeful smile at the end of the episode says it all. This is what she wanted.

4. This season has seen Hannah become increasingly dogmatic and rigid: She’s gone from someone who wants to be a writer to someone who is scared to write, to someone who refuses to write unless it fits her definition of “truth.” (In that way, she and Adam aren’t so different, after all.) Considering what we know about Hannah’s prose–does she even WRITE fiction? Because that’s definitely a requirement for Iowa--what would her statement letter to the MFA look like? What would she claim is her goal as an artist?

To be the voice of her generation. Or a voice of a generation?
Seriously, I think she must have written something along those lines. She continues to think of her writing as some sort of world-shattering material that irrevocably changes anyone who reads it. I can’t even imagine what she will do in actual writing workshops. What will she do when they tell her she can’t just tell the kidney stone handjob story over and over? Could she possibly absorb constructive criticism of her work? She identifies so strongly with her writing, we’d have to imagine her reaction would be the same as if someone just told her to her face that she was ugly and a bad person.
But perhaps this is exactly what we’ll get to see next season.
5. Name five more gifts that Desi would have appreciated as much as a James Taylor guitar pick. Don’t be afraid to get creative!
Joni Mitchell’s headband
A scarf made from Huddie Ledbetter’s prison overalls
A John Lennon motorcycle jacket encrusted with rose petals gathered from the Imagine memorial
Craft cocktail bitters made with spit shaken out of Bob Dylan’s harmonica
A painting of Johnny Cash done completely in ash from cigarettes smoked by inmates at Folsom Prison 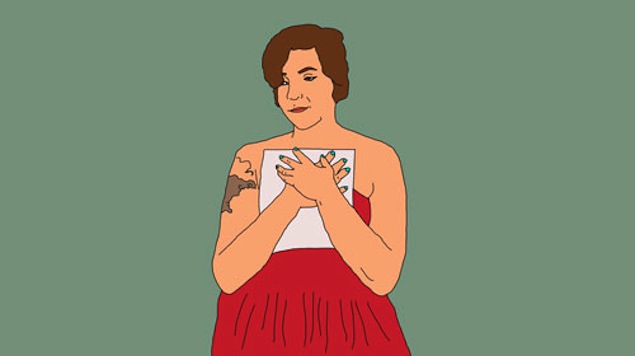