“Come to Paterson,” Jones urged the 2012 Republican Vince Presidential nominee. “I will take you around the streets of one of the poorest cities in New Jersey and you can meet the families of people who work two and sometimes three jobs to put food on the tale and clothes on their children.”

On William Bennett’s talk radio show, “Morning in America” last week, Ryan noted a “tailspin of culture, in our inner cities in particular, of men not working and just generations of men not even thinking about working or learning the value of work.”

The congressman subsequently said he intends to sit down with the Congressional Black Caucus to clarify what he said.

“Since you seem not to understand the causes of inner city poverty, they will be happy to explain to you the forces which have caused our urban cores to spiral downward to the point of despair,” the mayor wrote in a letter dated March 18th. “Poverty is not a condition anyone would choose. Impoverished neighborhoods are not the result of lazy black men, but rather the result of 400 years of slavery, Jim Crow Laws, housing polices and redlining, which resulted in the confinement of whole race of people…

“Come visit us, Congressman Ryan,” Jones added. “You will be treated with respect, but you will be expected to listen and hopefully learn.”

On Tuesday, following comments on the Assembly Budget Committee by Assemblyman Jay Webber (R-26), Jones similarly upbraided the suburban Republican lawmaker after Webber drew a comparison between per pupil school state funding in his hometown of Morris Plains ($400) versus Paterson ($18,000).

“I know Paterson has different challenges, but it’s tough to swallow,” Webber said.

“It’s easy to point fingers,” the mayor said.  “The history is to point fingers at waste and squander, but the context is we are a county seat and we host all government, entities which don’t contribute to our tax base. These are county-based services available to everyone. This is a school district under state control. For Paterson’s people to get tossed and trampled as wasteful when the State of New Jersey has been in full control of Paterson public schools is wrong.”

“We’re proud to have a team player like Benjie Wimberly do battle,” Sayegh said. “He is 100% Paterson. He represents our fighting spirit, and he’s not going to let an out-of-touch assemblyman degrade the way we live.” 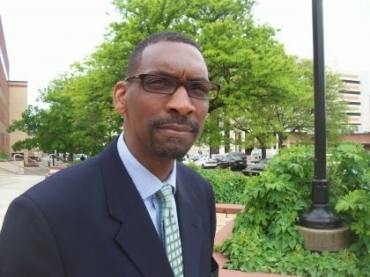