After weeks of hints and suggestions, James endorsed South Ward Councilman Ras Baraka with 48 days left before the May municipal election, saying the time for new Newark leadership is now.

“We will need a mayor who will stand up when it comes to the issues that shape the city of Newark and affect the people – a mayor who is going to stand up for the people,” said James while trays stacked with scrambled eggs, grits and fried whiting were passed out. “We don’t need a mayor who was has no Newark municipal government experience and will be learning on the job.”

James, who served as Newark’s mayor from 1986 to 2006, went on to further criticize the mayoral candidate he referenced in the opening of his speech – former state Assistant Attorney General Shavar Jeffries.

“We don’t need a mayor who’s having lunch, supporting a superintendent who’s shutting down all of our schools in our neighborhoods, and shutting out the parents who have a right to their voices being heard,” said James, referring to a photo of a February meeting between Cami Anderson, the Gov. Christie-appointed Newark School Superintendent and proponent of the controversial One Newark school reform plan, and Jeffries published in February by PolitickerNJ.com.

Carl Sharif, campaign strategist for Jeffries who was also present at the meeting, told PolitickerNJ.com that “Mr. Jeffries was making it very clear to her about how disgusted he was, and how upset he was about the disrespect that she had been showing the community with her actions. He was very direct and the conversation was often intense and contentious. He made it clear that this is something that he could not tolerate.”

Yet James, who did time for corruption, remained unconvinced.

“We do not need to be fooled again with false promises. We don’t need bosses in the north, and bosses in the south, telling the citizens of Newark what to do,” said James, referring to reports from several Democratic sources to PolitickerNJ.com that indicated that Jeffries met with Essex County Executive Joe DiVincenzo and conversed with allies of South Jersey power broker George Norcross III regarding his political future. “We are fighting against it.”

Baraka, who is currently on leave from his Central High School principal job, remembered when he took on James in the 1994 mayoral campaign at the age of 24. Twenty years on, Baraka looked to Newark’s serious challenges, including he potential state takeover of Newark’s finances, combined with a projected $35 to $40 million structural deficit in the city’s budget.

But Baraka, who noted that he now has the endorsements of former Mayor James and former Mayor Ken Gibson, “two stalwarts” in Newark’s political community, also referred to other potential takeovers on the city’s horizon.

“We’re not ready to give our city away to the county,” said Baraka. “I don’t think there’s anybody left in the county to endorse [the Jeffries team] any more. It’s starting to be so obvious that it’s sickening. It’s starting to be so clear that Ray Charles can see what’s happening around here. They’re organizing to protect one man. We’re organizing to protect the 300,000 people of this city. 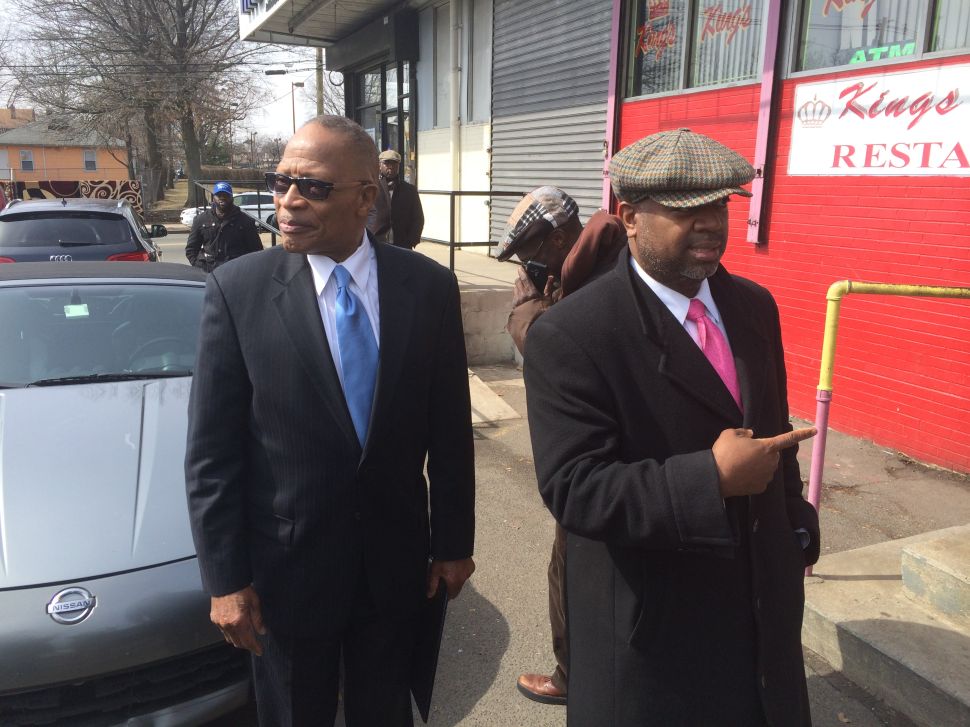