The former mayor of Orange wants to run again for mayor.

This time he wants to be mayor of West Orange.

“In addition to growing up and attending schools such as St Joseph’s, Redwood School and Seton Hall Prep here in West Orange, I am the former Mayor of a neighboring community,” Hawkins said tonight in a statement. “Knowing I had returned here to my home town some time ago with governmental experience, various residents expressed to me dissatisfaction with the high taxes, failed redevelopment on Main Street and rise in crime under the current West Orange administration.”

Son of a former Assemblyman and noted attorney, Hawkins, a former West Orange cop, ran for mayor of Orange after the meltdown and subsequent jailing of Mayor Mims Hackett.

Running with the support of former Gov. Dick Codey, Hawkins won the 2008 mayor’s race, got booted by the voters in 2012 when he lost to Dwayne Warren, and resurfaced last year in West Orange.

He is challenging incumbent Mayor Robert Parisi in the June primary.

“I remain humbled and appreciative of the steady increase in support that we have received thus far,” Hawkins said. “With the back drop of my experience including both a track record of success and lessons learned, I am looking forward to sharing my unique vision for West Orange over the coming months as we approach the November 2014 Mayoral election.

“After much thought and consideration, I have decided to answer the exploratory committee’s call to public service and fight for a better West Orange,” the former mayor added. “Accordingly, effective immediately, I am formally announcing my candidacy for Mayor of West Orange and ask for the support of all interested stakeholders in the upcoming November 2014 Mayoral election.” 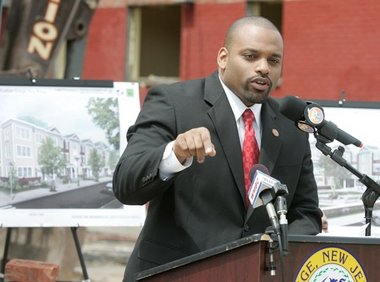