Stop us if you’ve heard this one.

Steve Buscemi, Janeane Garofalo and Anthony Weiner walk in to a bar.

Mr. Buscemi walked in first, seeming very much like every smarmy creep he has ever played throughout his career. But up close, Mr. Buscemi was actually cordial and warm. His portion wasn’t so much a Q & A as it was the two actors, who have collaborated on numerous occasions, swapping stories.

Highlights included Mr. Buscemi’s time as a NYC fireman (“it is more than just a job”), disputing the fact all his characters are weirdos and losers (“they may not be likeable, but they’re human”), and the time he sang Old McDonald on stage at a near empty comedy club with Andy Kauffman in the early 80’s.

Then, Ms. Garofalo entered the bar. The comedienne spoke about her upbringing and her public left-wing activism, paving the way for a certain down-and-out politico to take the stage.

“I eventually realized [my father] was flat out wrong about pretty much every issue,” Ms. Garofalo told the crowd of her conservative parent. “He would just spout talking points.”

She was amusing, while Mr. Buscemi was distracted. Smiling at his counterparts, he was busy counting all the favors Mr. Corrigan would owe him when it was all over. Finally, Mr. Corrigan introduced Mr. Weiner, and we cannot describe how surreal this show became. Yes, Mr. Weiner was appropriately self-deprecating, which helped. But we cannot stress how strange this panel was.

“This is the weirdest case of who doesn’t belong,” Mr. Weiner joked after taking the stage. We don’t think anything he said during his entire mayoral campaign was more truthful.

Mr. Corrigan praised Mr. Weiner’s 64 Keys to the City — his list of ideas in improving New York — and Mr. Weiner handled it well.

“Ideas live on longer than us,” Mr. Weiner said, while still joking that “it is a long list of ideas. The ones towards the front are very good stuff.”

The tension between Ms. Garofalo and Mr. Weiner became apparent when the topic of Weiner Communication Manager Barbara Morgan’s off the record “slutbag” comments was put to the panel.

“Everyone does understand that when you say ‘off the record,’ you are guaranteeing they use it, right?” Ms. Garofalo quipped.

Yet, when Mr. Corrigan pressed questions about Mr. Weiner’s “personal failings” affecting his campaign, Ms. Garofalo outed herself as something of a Weiner fan, defending him to the crowd. This came in the form of the comedian speaking over Mr. Weiner’s and answering questions on his behalf.

“Let him answer the question!” yelled a crowd member. When Mr. Weiner finally got a few seconds of silence, his comments were surprisingly elegant, though deflated.

“To treat me like this tragedy, some broken thing…” he trailed off, sounding genuinely passionate. “I’ll bounce back.”

We weren’t so sure. He then took the opportunity to network with his fellow panelists, inquiring about a potential career on the stage.

“I ask what actors usually make because I’m looking,” he said. This, we believe. 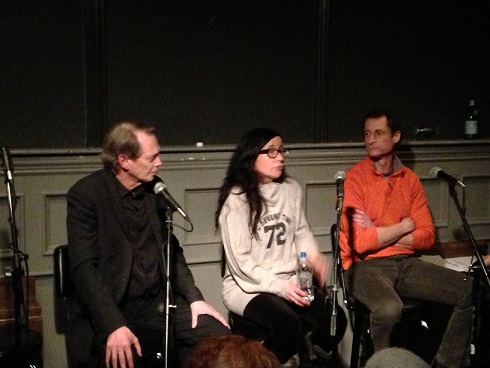