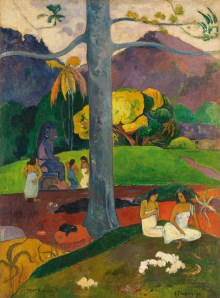 If you live in New York, you have contemplated escaping this winter. Enter the Museum of Modern Art’s “Gauguin: Metamorphoses,” a show featuring the post-impressionist’s paintings of tropical Tahiti and the Marquesas Islands, but also his lesser-known woodcarvings, ceramics, lithography, transfer drawings and monotypes—these also featuring brown bodies in sunny climes.

The exhibition’s curator, MoMA Prints Curator Starr Figura, argues, “Of all the mediums to which [Gauguin] applied himself, it was printmaking … that served as the greatest catalyst in his process of transformation.” From the show’s dimly lit atmosphere (to better preserve fragile prints) to a hanging that focuses on multiple states of the same woodcuts, monotypes and transfer drawings, this is really a setting for Gauguin’s work on paper. 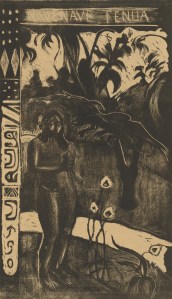 This means there are rare pieces from private collections like the delicate 1902 Marquesan Landscape with Figure, a gouache monotype with stippled colors depicting a lush glen. We’ve seen a lot of monotype in recent contemporary gallery shows lately, from Dan McCarthy’s effervescent current show at Anton Kern to the paintings of David Deutsch and Patrick Berran. With Gauguin, we see that the technique, with its reversal process, created fortuitous accidents and beautiful blotches long before 20th-century painting prized such abstractions.

Also on view are elegant drawings like Studies of Arms, Legs, and a Head, borrowed from France—these are intimate looks at the artist studying the bend of a knuckle or shape of a long, bare limb.

One of the matrix blocks used to print Gauguin’s 14-part Vollard Suite woodcut series (1898-89) shows the link between his sculpture and the woodcut process—it is a massive slab of carved wood, a superb object in its own right.

The show also puts on view some of Gauguin’s wooden “fetish” sculptures—carvings of what look like African totems made while he was in Tahiti. One in particular, of a cross-legged woman, uses a real pearl to decorate the sitter’s “third eye.” (The show makes no attempt at recreating environments like the carved wooden doorways we saw in the “Gauguin: Maker of Myth” show put on by the National Gallery three years ago or to borrow objects like the amazing chest carved by Gauguin and Émile Bernard recently purchased by the Art Institute of Chicago.) I would have liked to see more of the artist’s inventive pots and works in clay. And the show stays monographic; it doesn’t place Gauguin’s prints in relation to those of his contemporaries. The woodblocks of Edvard Munch come to mind—they are currently on view in an exhibition at the Princeton Art Museum—or the lithographs of Gauguin’s friend Odilon Redon. 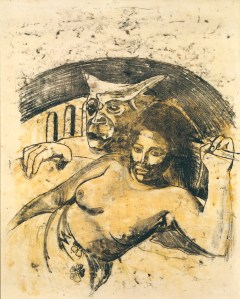 Gauguin’s paintings are not the main event here, but they are slipped into the exhibit here and there. The terrific Girl with a Fan has been borrowed from Essen. The mind-blowingly kitschy The Moon and the Earth, 1893, a depiction of a tanned Polynesian man, would make for a great Carlos Santana greatest hits album cover.

Which brings us to what the show soft-pedals. With these paintings of well-oiled, half-naked Polynesian men and women, and the wood carvings of evil spirits, it is hard not to consider Gauguin’s subject matter a little over the top. A catalog essay by Hal Foster takes on the theme of primitivism directly, but it might have been useful to have in the show itself some acknowledgement of the problematic colonial fictions of paradise Gauguin spun. Without a curatorial nod in this direction, our trip though the galleries threatens to become a kind of “going native,” holiday-in-the-sun tourism most New Yorkers might feel too sophisticated to embark upon.