CAMDEN– Since Gov. Chris Christie’s administration was engulfed by the George Washington Bridge lane closure controversy the governor has largely kept out of the media spotlight.

With the exception of a two-hour-long news conference in January, the governor has shied away from reporters and instead has sought cameras and media attention on his own terms – town halls, his monthly radio program “Ask the Governor,” public appearances without press avails, etc.

But if there’s someone unwilling to beat around the bush, crack a joke about the bridge controversy and then get a smile from the governor on the issue that’s brought his administration to retreat from the spotlight is George Norcross III.

“Since the governor joined us for the dedication of MD Anderson back in October a lot of things have happened,” Norcross told a crowd of at least 300 people in Camden for a ground-breaking ceremony for a new grade school.

The Dallas Cowboys, Christie’s favorite NFL team, “collapsed,” Norcross said to laughs (noting he texted the governor during their last game to make sure the governor was watching) and there was a statewide election.

“We won that one too for the Legislature,” Norcross noted for the record, taking another jovial jab at the governor.

But then the South Jersey Democratic power broker moved on to discuss an annual fundraiser for the Larc School in Bellmawr, which includes closing the Benjamin Franklin Bridge to traffic for annual charitable run.

“There’s one thing the governor, with all his power, has not been able to achieve,” he said. “I’m the one who’s able to shut down the bridge.”

The joke garnered big laughs from the crowd and a smile from the governor, who was sitting a few feet away from Norcross.

“We’re going to close that bridge again for a couple of hours,” he went on, asking the governor to join the fundraising event.

“Yeah, ole George is something, isn’t he?” Christie later joked when it was his chance to step up to the lectern.

“He kicks me around and then says all those nice things about me before I come up here,” Christie said. 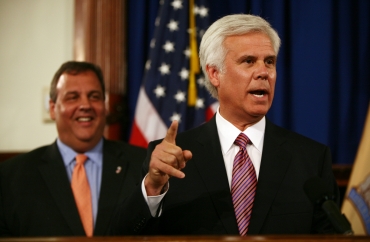