Two years ago, I came up with new rule that I’ll basically accept any offer if it will tie me up and keep me away from Austin during SXSW week. The results have been awesome: Last year I spoke at a small event in Australia. This year I spoke at one in Ireland.

It’s not because I live in Austin now and can rent out my place for a lot of money if I’m gone (although that is nice). It’s clearly not because I have a problem with conferences in general, or I wouldn’t have spent time at others. It’s not even SXSW, though since 2007 I’ve seen it undergo some changes and transformations that I can only shake my head at.

It’s because you don’t learn anything at a get-together with 286,000 people at it. You don’t find opportunities in the spot that everyone else has descended upon to look. And you definitely don’t get much out of an event that is clearly inclined to be an ego-assuaging party more than it is a conference.

“But they had Shake Shack at SXSW this week!” you say. If only it wasn’t also sold in six other states the other 355 days of the year.

It’s funny, for all the love of business books and buzzwords, SXSW is the definition of a red ocean—it’s loud, overcrowded, competitive and difficult to break through. There’s too much posturing, too much bluster, too much fighting the last war. Every startup taking their eye off the ball to recreate Twitter’s launch at SXSW in 2007 (which I remember scoffing at, at the time). It’s skating to where the puck was. It’s a choreographed performance that everyone feels obligated to do each year.

Let’s be honest: if you know your field, conferences are not usually the best place to learn or work. The bigger they are, the more general they become—as SXSW clearly has—and the further they lag behind. The need to appeal to the broadest possible cohort of attendees puts them six months to two years behind current, let alone more innovative practices. So why are we supposed to go this, again?

And the news that gets reported back from Austin? It is usually not news, it’s reporters justifying their expenses by sending in something, or it’s carefully staged pseudo-events designed for coverage.

The panel format exacerbates this. It’s not one speaker, articulating a message or telling a story to an audience. It’s five nobodies, averaging each other out—each looking for a soundbyte so you’ll remember their name. At this point, panels are like poorly curated podcasts with no editor. They mostly benefit the people speaking…and make them feel important.

Shall we review some of the preposterous panels from SXSW this year?

–Orgasm: The Broadband of Human Connection

–The Gamers’ Guide to Parenting

–I’ll Show You Mine If You Show Me Yours!

And when they’re not writing panel titles that appear designed to give people douchechills, most panelists (and speakers) are lying. By that I mean, either exaggerating their credentials and expertise or, if they truly have some, lying by omission (nobody wants to give away their secrets). In fact, when you are honest—which I try to be, especially at events when I am getting paid—most people are shocked. They tell you this after the fact with genuine surprise. As if they expected (and were OK with!) everyone phoning it in and fluffing it.

This is what you get when you attend SXSW. And what do you pay for it? $1,495 for a pass and $1000 for travel and accommodations, with some hotels going for $1000 a night. It’s like no one understands that there are mastermind groups where you get a year of direct access to real speakers, thinkers and entrepreneurs for less than what some people paid to fight their way through the crowds at the Austin Convention Center.

Oh but you meet so many great people / everyone is in town for one magical week.

Strategically, I can think of no worse time for an entrepreneur to pitch a journalist, or a startup to pitch potential investors or employees. Do you not realize these people are as overwhelmed (or inebriated) as you are, and phoning it in just enough so their bosses don’t notice? Upon the Betabeat staff’s return from SXSW 2014, they reported their slogan for the week was, “Oh there you are!” which is what the aggressive networkers they were trying to shake would say upon finding them again.

Bluntly, SXSW has turned into an ironic spring break for people with corporate jobs to escape their lives. You can pretend to work while waiting in line for free beer and hoping to hook up with someone like you. But I’m not sure corporate attendees realize this is nothing more than a dress-suit bribe, offered by their employer to give them trappings of power, instead of the real thing. Your boss writes it off as a business expense.

At the very least spring break was supposed to be fun. The parties at SXSW? This is tech at its worst. Why do you have to get on a guest list or RSVP to seemingly every party? This exclusivity is manufactured, to give every startup spending other people’s money a chance to feel important and special. It’s definitely not to limit the amount of free booze they shill (corporate sponsors pay for that). It’s to manufacture status so attendees will feel like they got into the “cool” party with the “in” crowd. And the only way corporations know how to be cool is by proximity—to musicians, to film stars, to writers—and creating exclusive lists for parties that are expensive and lame.

I want to be clear. I don’t think the conference organizers at SXSW are to blame. Nor was this terrible car accident anyone but the drunk driver’s fault. From everything I’ve seen, they put on a good show, care about safety and seem to have stayed true to their origins. And they’re doing a good job �
� SXSW 2014’s economic impact on Austin this year was $190 million. The problem is you. The problem is us. That we willingly subject ourselves to everything I just described. And don’t even think about why we’re doing it.

I stopped going when I heard someone—and unfortunately I forget who—describe South by Southwest as a metaphor for everything that is wrong with the internet. Too big, too corporate, too hyped, too bullshit. I think they’re right.

But there may be another, more specific metaphor. Every year during SXSW, every post, column and wall in town is covered with Saran wrap—so that posters can be quickly torn down at the end of the night. And yet…thousands of bands and startups and directors spent how many thousands of dollars to print up flyers and posters simply to be overwhelmed and torn down a few hours later. That is SXSW—an ephemeral moment of self-promotion lost amidst a sea of other self-promoters doing the exact same thing, while thinking they’re doing something totally different. Pardon me, disruptive.

It’s like that line from Arthur Miller about writing your name in a cake of ice on a hot summer day. Except SXSW is an oven…and you chose to do it there instead of any number of places where the etching would last longer. 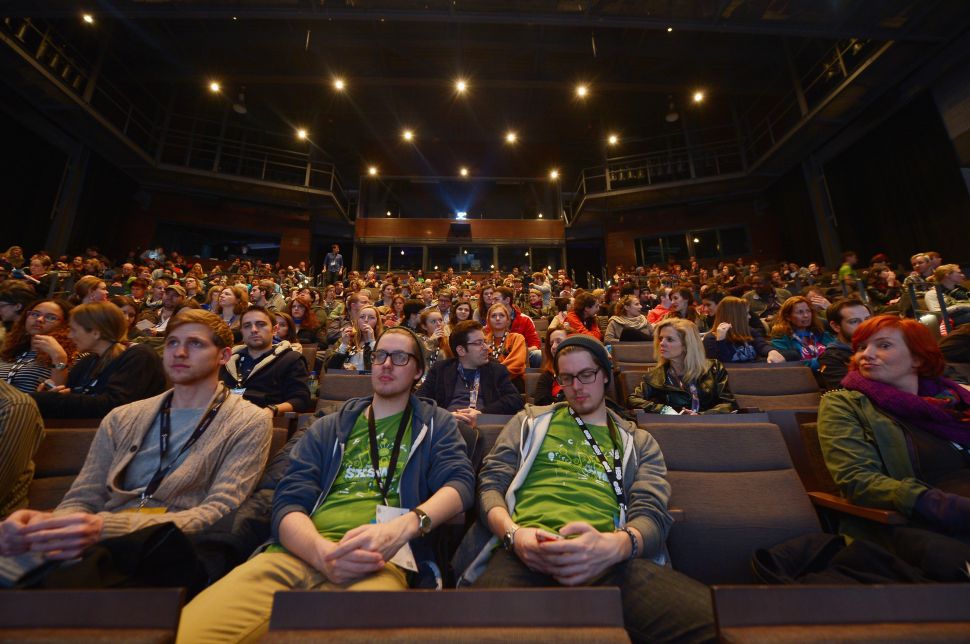