Gothamist editors took to Twitter to complain that The Daily News didn’t give them credit on a story that the website broke about a guy tattooing his sedated dog.

“Blogs are often accused of aggregating from mainstream outlets, but many mainstream outlets, including some of our local papers, have a habit of picking up stories broken on blogs without credit (or a link, if the story is online),” Gothamist publisher Jake Dobkin told the Observer. “Now, I understand that newspapers have a long history of rewrite desks which aggregate content from other outlets, add a fact or two, and republish mostly without credit, but at any good blog, that would be considered a form of plagiarism.”

A tattoo artist inking his dog, of course, is the kind of story tailor-made for the tabloids. Tattoos! Pets! Outrage about tattoos and pets! It really has it all (including a reality-television angle, since Red Legged Devil, the shop where the pet owner/pet tattoo artist worked, was featured on a TLC show).

Oh, did we mention that the shop is in Brooklyn? Brooklyn!

“Example of @NYDailyNews lifting one of our stories, with original quotes, and not crediting,” deputy editor Jen Carlson tweeted, with links to both stories.

The Daily News, which put up its story yesterday afternoon, pointed out that the story credited Gothamist and, calling the omission of a link-back an oversight, amended the story.

“When an oversight happens again and again and again, it starts to look like editorial policy,” Gothamist managing editor John Del Signore tweeted in reply. “And even with link, no quote attribution,” Ms. Carlson added.

The Daily News, while it did credit Gothamist for posting the story, didn’t attribute the best quote in the story, where the owner of the tattoo shop defended his employee by noting that inking your dog isn’t as bad as raping a 12-year-old (true!), to Gothamist.

“When aggregating, bloggers always credit and quote the original source. This practice has the virtue of being intellectually honest, saves time, and shows respect to other journalists, and I think mainstream outlets should consider adopting it as a general practice,” Mr. Dobkin told us.
Still, Mr. Dobkin noted, just because you are a website fighting for links and attribution on a viral story doesn’t mean you should get into a fight over the Internet.
“But I also think it’s unzen to pick fights like this, especially in public, because in some cases a lack of attribution is simply a mistake, or the story could have been picked up independently,” Mr. Dobkin concluded. “Therefore, I counsel my staff to handle this stuff like mature media professionals–offline, shouting at each other at bars.”
The Observer heartily endorses this old-fashioned method of conflict resolution. 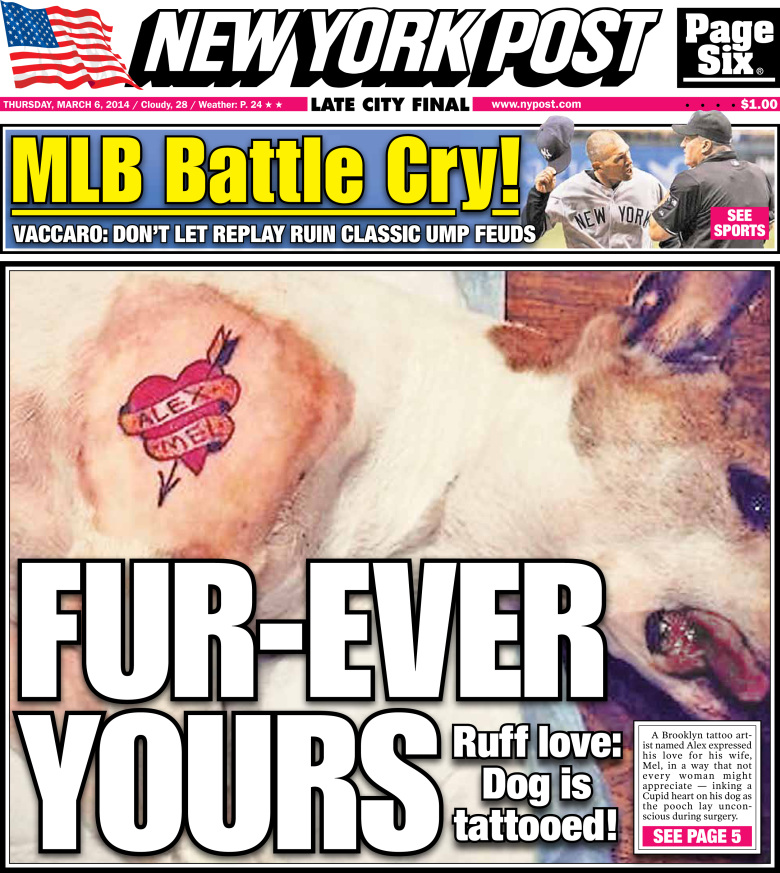