LINDEN – The head of the Union County Democratic Committee will issue an endorsement in the hotly contested race to fill the congressional seat set to be vacated by U.S. Rep. Rush Holt (D-12), the committee’s chairman said Thursday.

Assemblyman Jerry Green (D-22) told PolitickerNJ an open primary is unlikely and that Plainfield, Scotch Plains and Fanwood officials will meet with each of the Democratic hopefuls vying for their party’s nomination sometime next week.

“We’re going to endorse,” said Green, explaining he’s held off from endorsing a candidate until he garners additional local feedback.

“I need more of an input so it doesn’t come off as ‘Jerry Green did this without community support,’” Green said. “I promise to listen to all of [the candidates].”

Green said Mapp’s endorsement did not come “at the appropriate time.”

“Elected officials normally allow the chairmen to sit and discuss,” Green said. “What he did excluded everyone.”

The Democrat who wins the party’s nomination will likely go toe-to-toe in the left-leaning district with Republican hopeful Alieta Eck, the only officially declared GOP candidate pursing the position. 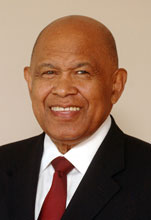