PRINCETON – When Princeton Community Democratic Organization (PCDO) Chairman Jim Durbin announced a second ballot runoff tonight and the losers headed for the back of the room, he alerted committee members to the names of the two surviving competitors.

But people already knew they would have to choose between Assemblywoman Bonnie Watson Coleman (D-15) and state Sen. Linda Greenstein (D-14), the two women in the race for U.S. Rep. Rush Holt’s (D-12) Congressional seat fighting to be New Jersey’s sole woman representative at the federal level.

The rivalry is unmistakable.

So far, their public clashes have consisted of Watson Coleman slapping at Democrats who didn’t go all out last year for unsuccessful Democratic gubernatorial candidate Barbara Buono, and Greenstein taking aim at Tea Party extremism – lingering on that last word as if its application might also be appropriate elsewhere.

Watson Coleman wants to be the progressives’ progressive, and continues to use last year’s gubernatorial election as an example of her commitment to party principles.

“I was Barbara Buono’s chairwoman for her campaign to succeed this governor who has no… right to represent this state right now,” said Watson Coleman, who left the Select Committee on Investigation into Bridgegate after saying a week ago on MCNBC that Gov. Chris Christie should resign.

Greenstein came in later with a proud detail about how she currently serves as a member of the Select Committee on Investigation, sparking a few hand claps in the crowd of 87 voting members.

“Mealy-mouthed Democrats,” was how Watson Coleman characterized those elected officials who did not more aggressively fight for Buono.

But Greenstein and her allies make no apologies for their efforts to get Greenstein re-elected in one of the most competitive general election districts in the state.

Christie polled high in the 14th District in the lead up to the 2013 general election. Rather than embrace a gubernatorial candidate running 20 points behind the Republican incumbent, Greenstein in her advertising focused on her own specific record and issues advocacy in the district.

One radio spot her campaign ran noted her ability to work in a bipartisan way with Christie, precisely the message that now has Watson Coleman on offense.

Greenstein tonight in her remarks to Princeton Democrats fought back, noting that Christie inserted himself in the 14th District with an ad on behalf of Republican Peter Inverso.

“I am proud that Christie called me a partisan politician who blocks his initiatives at every turn,” said the senator, referring to the Christie spot.

She also lamented Christie’s decision to veto what she described as 40 pro-jobs bills.

Responding to Greenstein’s early campaign tactic of making the Tea Party the enemy, Watson Coleman tonight said, “I do not believe the Tea Party is on a growth spurt. People are tired of the mean-spiritedness.”

In their head-to-head clash, Watson Coleman won, but did not receive the required 60% to get her the endorsement of the local organization.

“Ten points is significant,” Watson Coleman beamed on her way out the door.

Having stymied a 60% win by her Mercer-based rival, Greenstein likewise claimed victory.

“I feel good about the outcome,” said the Middlesex senator.

For his part, Durbin at least sounded happy that he didn’t have to pick a side in this war of rivals.

“I don’t mind being Switzerland,” the chairman cracked. 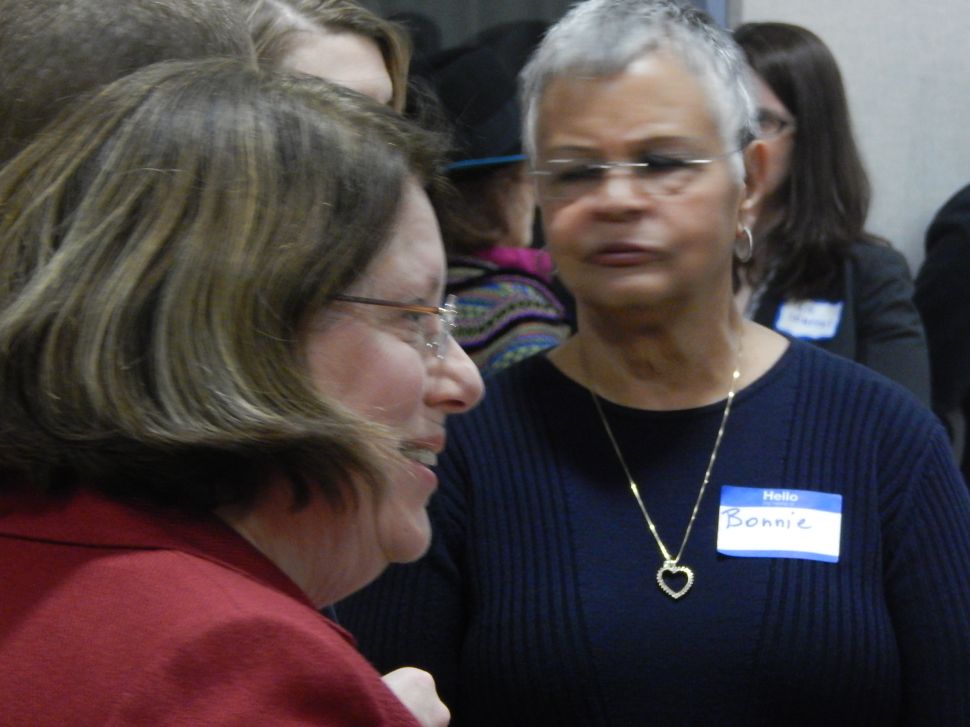