New Jersey’s Democratic Assembly majority leader is calling on Gov. Chris Christie to condemn “incredibly offensive and clueless remarks” made by GOP megadonor and the co-founder of Home Depot.

“Mr. Langone’s incredibly offensive and clueless remarks minimize the human tragedy of the Holocaust in an attempt to serve his own political agenda,” Greenwald said in a statement. “Such remarks are outrageous and disgusting. I call on Gov. Christie to join me in unequivocally condemning these remarks, which have no place in responsible public discourse.”

The lawmaker was referencing an interview with POLITICO where Langone warned of populist rhetoric against the nation’s wealthy.

“In two-dozen interviews, the denizens of Wall Street and wealthy precincts around the nation said they are still plenty worried about the shift in tone toward top earners and the popularity of class-based appeals. On the right, the rise of populists including Kentucky Sen. Rand Paul and Texas Sen. Ted Cruz still makes wealthy donors eyeing 2016 uncomfortable. But wealthy Republicans — who were having a collective meltdown just two months ago — also say they see signs that the political zeitgeist may be shifting back their way and hope the trend continues,” POLITICO reported.

“I hope it’s not working,” Ken Langone, the billionaire co-founder of Home Depot and major GOP donor, said of populist political appeals. “Because if you go back to 1933, with different words, this is what Hitler was saying in Germany. You don’t survive as a society if you encourage and thrive on envy or jealousy.” 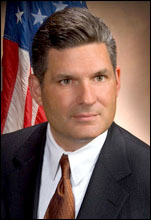