A group of safe street advocates took matters into their own hands this weekend by posting 20-mph road signs in ten communities across Manhattan, Queens and Brooklyn.

Donated by a company called Road Traffic Signs, the official-looking “20 is plenty” warnings were zip-tied to lamp posts in neighborhoods with pending applications for slow zones.

Such delays are a holdover from a decision during former Mayor Michael Bloomberg’s administration, which granted community boards veto power over requests for the special designation. As a result, accident-prone areas remain wanting of reliefs like speed bumps, road narrowing, redirection of traffic and the requested speed cap of 20 mph.

Amy Cohen, mother of Sammy, a 12-year old struck and killed by a speeding van in Park Slope, stressed that her son would have been alive had the speed limit been 20 instead of 30. Recalling how her son ran after a soccer ball that he was kicking around before practice, she said that “the driver acknowledged that he saw the ball, but he couldn’t stop.”

Keegan Stephan, an organizer with Right of Way, the advocacy group, said that there are currently dozens of snubbed communities where people continue to die from speeding vehicles. “If you look at this recent slew of tragic deaths, they all occurred in neighborhoods that had applied for slow zones—Noshat Nahian in Jackson Heights, Coopers Stock on the Upper West Side, Lucian Merryweather in Fort Greene, Sammy Cohen Eckstein in Park Slope, and so many more,” he said, naming various communities for the victims of traffic-related accidents. “These communities knew their streets were dangerous and asked the city to fix them, but were told no or not yet by the last administration.”

A female resident from Clinton Hill says that their efforts align with Mayor De Blasio’s Vision Zero road safety initiative, which broke ground mid-January, albeit in a timelier manner. “With Vision Zero the city is behind us,” she said. “We can’t wait.”

As another sign of confidence, the renegade group installed the signs in broad daylight, as opposed to the first salvo of the campaign late last year, when helmet-clad volunteers operated under cover of night.

Find out if your community joined the plea in the video below. 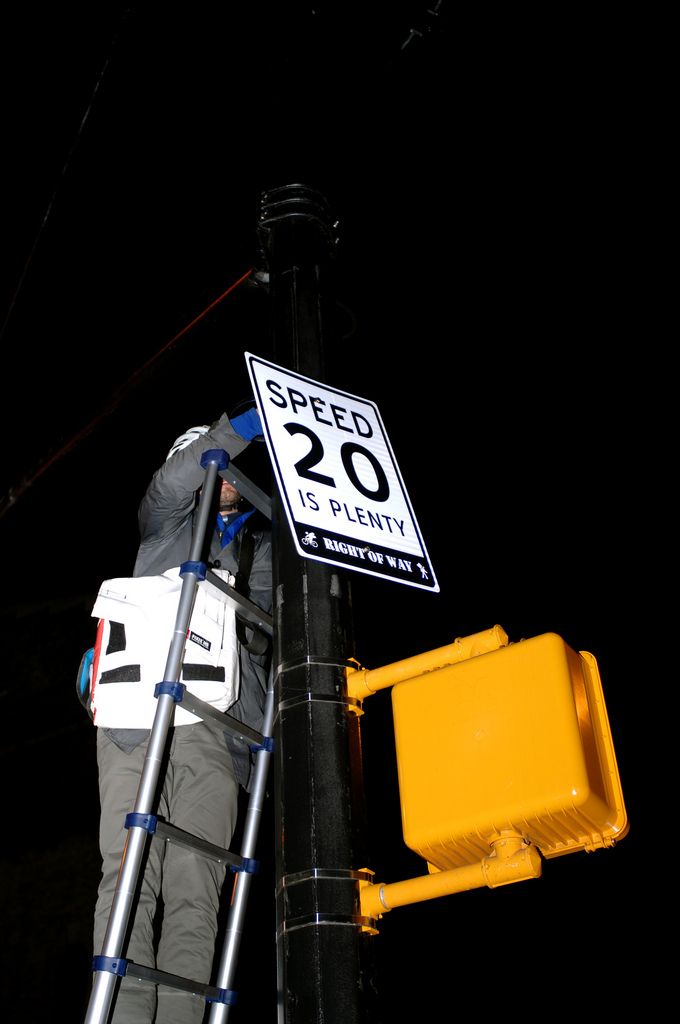