EAST BRUNSWICK – Middlesex County Democrats resoundingly endorsed Linda Greenstein for U.S. Congress, but that didn’t stop Upendra Chivukula and Bonnie Watson Coleman from horning in on this shag carpeted public library affair and making a pitch to local members tonight at a meeting of the East Brunswick Democratic Committee.

Days after calling for the resignation of Gov. Chris Christie and subsequently stepping down from the Select Committee on Investigation amid an uproar of criticism, Watson Coleman, assemblywoman from the 15th District, surfaced here in front of a crowd of Democrats as the fiery primary competitor in search of the field’s left flank.

“I have been holding the governor’s feet to the fire,” Watson Coleman said. “I stood up with [last year’s Democratic nominee for governor] Barbara Buono even though her party wasn’t standing with her. One month after the election, this house of cards started to fall. No one wanted to be seen in a photograph with us, and now we are losing out under this transactional, mean-spirited, bullying administration.

“I will stand up,” she added, “to mealy-mouthed Democrats.”

Also at the front of the room, Greenstein and Chivukula sedately presented themselves as those candidates who would most approximate the representation of retiring U.S. Rep. Rush Holt (D-12), whose seat all three candidates crave.

Stung after not receiving consideration for the line from the Middlesex County Democrats, Chivukula, an engineer by trade, said he offers private sector experience, the same way Holt did when he first ran for Congress – and real world grounding in the scientific method.

PolitickerNJ asked the Somerset County candidate if his presence in Middlesex – in front of a committee already on record in support of Greenstein – means he will claw for every vote.

“Yes, it does,” said the assemblyman. “I don’t think a small group of party leaders in the southern part of the county will decide this election.”

“I have friends in this county, irrespective of the machine that has spoken,” she said.

Middlesex’s favorite daughter, Greenstein talked about deliberative temperament and her record as an attorney and lawmaker trained to weigh evidence. A hard campaigner who has survived in a tough district, Greenstein trained her sights on the extremism of the Tea Party movement, and quoted U.S. Sen. Cory Booker (D-NJ) in her speech, when she invoked “pragmatism” over dogma.

“I will continue to fight for progressive policies,” she told her fellow Democrats.

It was a long day for Greenstein, who returned from a campaign trip to Washington, D.C. in time to get to the East Brunswick Democrats’ event.

“I issued an endorsement for Linda, but we always open the floor to every candidate,” said the organization’s chair, David Lonski.

Watson Coleman’s criticism of Democrats who didn’t stand vocally with Buono last year revealed a point of attack that the candidate appears willing to use in attempting to tie Greenstein to the South Jersey Democratic establishment and Senate President Steve Sweeney (D-3), an upper house ally of Greenstein’s.

That wing of the party didn’t project much enthusiasm for Buono 2013.

On a trip to Israel at present, the senate president continues to make moves suggestive of a candidate for governor on a collision course with Jersey City Mayor Steve Fulop, who also has gubernatorial designs. The presence on Team Watson Coleman of Adam Steinberger as campaign manager, announced earlier today, had political insiders buzzing about the prospect of a coming endorsement of Watson Coleman by the mayor of Jersey City as part of Fulop’s ongoing attempt to depict himself as an alternative to Sweeney.

Although Steinberger worked on Fulop’s successful field operation last year, there’s nothing more to suggest that the mayor will get involved in this up for grabs Central Jersey district that contains portions of four counties, with Middlesex the biggest in terms of total raw numbers but slightly behind Mercer in Democratic votes. And anyway, Watson Coleman backed Fulop’s opponent last year.

For his part, working the crowd after his remarks, Chivukula expects to have the line in Somerset, where Democratic Chair Peg Schaffer has already backed him and this weekend vociferously sang his praises at the Belmar St. Patrick’s Parade.

Mercer’s with Watson Coleman but the bearer of the line in that county must get 60% of the vote at the organization’s convention, to be held later this month.

Coffee talk turned to the remaining party chair in the district, who has yet to endorse a candidate in the race – Union County’s Jerry Green – an assemblyman from the 22nd District.

The rumor is that Green is leaning toward an open primary, the same way he did last year during the U.S. Senate tilt, and as former Chair Charlotte DeFilippo did in the 2012 CD10 Democratic Primary.

Green’s partner in power, state Sen. Ray Lesniak (D-20) detests Watson Coleman; but the mayor of the assemblyman’s hometown of Plainfield, Adrian Mapp, backs her, putting the county chair in a political pretzel.

And while Middlesex expects to award Greenstein the power position in her home county, Watson Coleman and Chivukula both this evening appeared eager to vigorously campaign on the senator’s turf.

The ugly early clash of Watson Coleman and Greenstein in particular for the right to represent New Jersey as the only woman member of the state’s Congressional delegation proved emotional for one party operative, a woman, speaking on condition of anonimity to PolitickerNJ.

“I guess it’s good for the process – competition,” the operative said, trying to shrug off what she fears is coming political primary carnage. 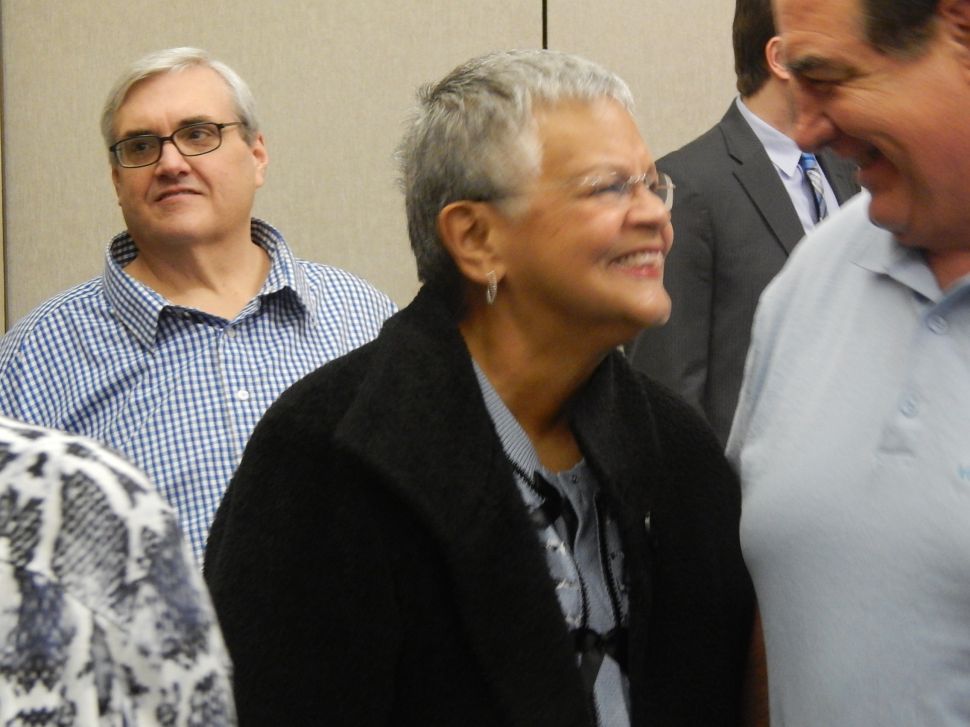