Finally! A chance to be a cheery, cheeky chappie.

Oh, that is not to say he is unpleasant or disagreeable. Sitting upstairs at the downtown Crosby Street Hotel, clad in a cozy blue cardigan and meticulously applying jam to a croissant, there are a host of positive adjectives that might be applied to Mr. Fiennes. He is exceedingly pleasant. He is thoughtful. He is frank. He is sensible. He is considerate. He is politely inquisitive.

But he is conflicted about that croissant.

“Hotels elicit a confused response for me,” he admits. “The skill of a good hotel or a good restaurant is that you feel at ease, and things magically appear, and you’re not thinking about signing the check. But then, to be over-fussed on, when the service is not right, to feel people working hard telling you this thing is great when you’re thinking it isn’t that great. You’re signing a check for $80 for a croissant? Sorry, I could get this down the road and be happy.”

That Mr. Fiennes is decidedly not the kind of Hollywood star who orders up entire breadbaskets and reeks of sham charm should surprise no one. Amon Goeth in Schindler’s List was a psychopath. Charles Dickens in this year’s Invisible Woman was melancholy. Francis Dolarhyde in Red Dragon was a melancholy psychopath. Lord Voldemort was … quirky and funny-looking.

Yet here the 51-year-old, RADA-trained Mr. Fiennes was in town to promote Wes Anderson’s new film, The Grand Budapest Hotel, and his own comic role in it as a man who oozes charm. Even Mr. Fiennes seemed surprised at the turn of events.

“This is a great gift, a comic part,” he said, eying the fantastic variety of miniature jams arrayed on the room service tray. “The truth is I don’t often get asked to do them.”

In Anderson’s farcical ensemble comedy-drama, set in the 1930s, Mr. Fiennes’ character, Monsieur Gustave, is a fastidious concierge at a Central European hotel who knows everything about how to please. Gustave writes epic poems, perfumes himself liberally, “sleeps with all his friends” and knows precisely what to say and do to make his elderly clientele fall in love with him. Peacock-like, he struts through the halls of the Grand Budapest, insisting that elderly millionairesses change the color of their nail polish. And then he must race through the movie trying to prove his innocence after being framed for the murder of Madame D (Tilda Swinton).

Like so many protagonists, Gustave seems to be a projection of his creator. “The movie is an extension of the principles by which Wes lives his life,” says Jeff Goldblum, who plays a malevolent executor in one of the film’s ensemble roles. “Even in a world that is crass, vulgar and a little ugly, or even brutal, [he] seems to find poetry and loveliness.”

That genius for giving people the world they want, rather than the one they inhabit, crystallizes in a speech by Gustave in which he suggests that the greatest part of charm consists in sensing what other people want—an intuition not unlike that behind an especially marvelous hotel.

“They are sort of environments where there’s an element of seduction about the way a life can be lived,” offered Mr. Fiennes. “Things can magically appear. People can come in and the table is laid or new towels are in the room.”

For his part, Mr. Anderson seems fascinated by hotels, so much so that before filming, he assembled the cast in one near Gorlitz, Germany. “One of the loveliest experiences I’ve ever had,” said Mr. Goldblum, noting that he spent much of the time “bothering Willem Dafoe with my piano-playing and singing.”

However, Mr. Fiennes’ own perspective on hotels and hospitality differs from Gustave’s, and Mr. Goldblum’s.

“I worked in a [London] hotel called Brown’s many years ago. I was a house porter, which is the lowest of the low. You wear a white coat, and you change light bulbs and shower curtains, and you hoover corridors. On a good day, when they were short-staffed, I was promoted to wearing a Brown’s hotel uniform. It was brown with gold braid, and I could carry luggage. And I could see the hierarchy behind the green, beige door.”

He continued: “There was one manager who was so ingratiating to the guests and pissy to the staff. He wasn’t popular at all”—even, apparently, with the guests. “My memory was of guests being really rude to him and him going on being really ingratiating,” Mr. Fiennes recalled.

But then charmers like Gustave do have at their core a devotion to making others happy, no matter the cost. So to prepare for his role, Mr. Fiennes watched a documentary about one of his favorite hotels, Inside Claridge’s. He marveled at the concierge featured in the film: “You could feel his devotion to the running of the hotel and feeling the needs of the guests. He had no underlying contempt. It was very touching, because clearly this was an elite hotel, and yet there was an American couple who’d been coming for years, and their chair was always laid out in a certain way, and the staff always came out to greet them, because they’d been there for years and years.”

Elitism pervades The Grand Budapest Hotel, from the lavish jewel-toned waistcoats to the courtesans au chocolat. This privileged—perhaps over-privileged—moment in time is underlined by the supposition that the film occurs during the last glory days of the hotel, shortly before the fictional country is overtaken by fascists.

That theme of transition, not the candy-colored set or the Prada-rich wardrobe, is what drew Mr. Fiennes:

“I think it’s pointing up the value of the essentially decent act. When I read it, I was so moved. You have this caper comedy that ends up in a place where quite real things are being suggested about people. Gustave at the end [sacrifices himself] for Zero [the lobby boy] on a point of principle.”

So Gustave is more than a comic charmer?

“He stands up against the forces of fascism. Those forces are still around in different guises in all the governments that brutalize and spy and wrongly imprison without trial. To my mind, no country is completely innocent, but even if there is not an overt fascist movement, [you see] the authoritarian’s government determination to squash the right of the individual. You see it in China, Russia, Iran. Gustave is standing up against that shit.” 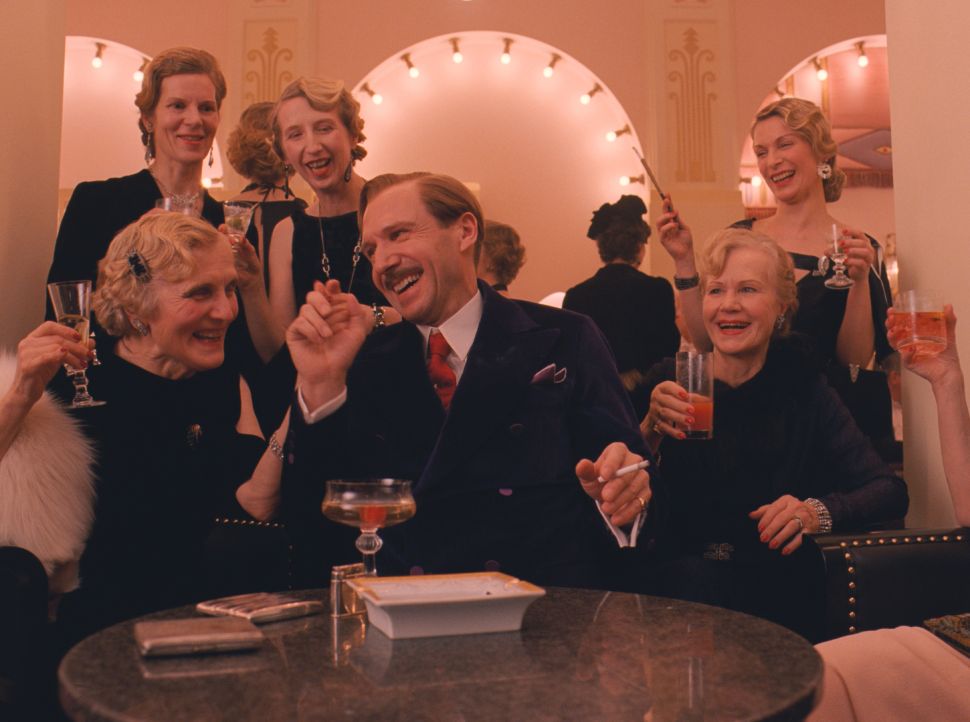