NEWARK – Miguel Arce sat in the basement of a Summer Avenue house in Newark’s Central Ward, a place that could only be described as a campaign war room.

The concrete walls are festooned with Newark ward maps, breaking down districts for better targeting. One Central Ward map is color coded in a way that underscores an underlying demographic tension in this critical ward of approximately 57,000 residents: black, Latino and mixed.

Under a naked light bulb, Arce, 44, who is running as an independent candidate for Cental Ward councilman, said what he sees when he emerges from his bunker into the street.

“After all my years in politics, I see disaster for the citizens of this city,” said Arce, the chief of staff for At-Large Councilman Carlos Gonzalez. “I’ve seen people come and go, and I’ve never seen an election like this one.”

Darrin Sharif, the incumbent councilman who was elected in 2010, is running as an independent.

Arce says that he is still loyal to Gonzalez, who he has worked for since 2009, although Gonzalez is on Jeffries’ slate. But Arce also made it clear why has chosen to go solo going into the May municipal election.

For Arce, his run is also about asserting the power of a demographic group that is growing in numbers in the Central Ward, a critical, battleground ward in any Newark city-wide election.

“The pressure is on the people on the slates, because they have to deliver for their teams. I don’t have that type of pressure,” Arce added. “And we’ve been in the Central Ward so long, and we’ve worked so many elections, that we know people by their first names.”

State officials are strongly suggesting that they will move to take over the City of Newark’s finances in the wake of its numerous state budget law transgressions, as well as revelations of alleged mismanagement and illegal activity at the Newark Watershed Conservation and Development Corporation. The potential state takeover of Newark’s finances, combined with a projected $35 to $40 million structural deficit in Newark’s budget, makes the situation particularly precarious for whoever becomes Newark’s next mayor, or whoever serves on the city council.

Arce rejected the idea that a state takeover of the city’s finances would be a helpful step, in the same way that he thinks local control of the schools is needed.

“When Cory Booker came in as mayor in 2006, he inherited a $180 million budget deficit. Today, we’re down to $40 million. We’ve been working very, very hard with less,” Arce said. “Some people are running around saying we have to take our city back. I don’t understand who we’re going to take our city back from, because we’ve never given it away to anyone. And we still shouldn’t.

“There is no way that we can allow the State of New Jersey to take control of our city,” Arce added. “When you look at what Gov. Chris Christie has done in this state, and how he’s done it, the citizens of this city cannot take that type of abuse. Look at what they’re doing to the school system.”

Arce noted that he has been working on a plan to create a non-profit Central Ward Development Corporation as a way to create jobs and economic growth specifically in the Central Ward.

“The Central Ward cannot afford to depend on the city’s coffers right now,” said Jose Arce, 43, Miguel’s brother and his campaign manager. “We think that if we make this development corporation happen, we’re not going to need the city to save us.”

The Central Ward has never had a Latino councilman. With less than eight weeks left in the campaign, Arce feels confident that he can wage political war effectively from his basement war room and take out the six other certified candidates in his way.

“To me, it’s irrelevant whose running on tickets. We Latinos have to stick together. The biggest problem that we have is that we don’t what team is,” Arce said. “How did Latinos help elect Barack Obama president for the second time and we can’t do it in our town? How do you let someone dictate to you what you should do? We are empowering other people when we could be empowering our own people. The power of the Latino vote has always been in Newark. We just never knew how to exercise that power.” 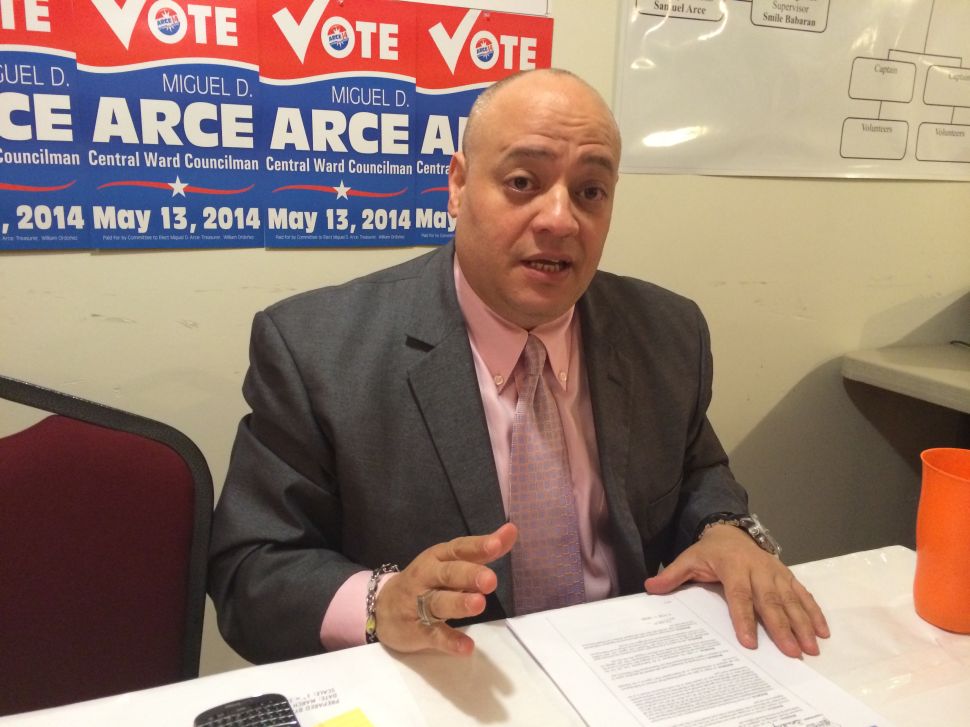