PATERSON – Former Mayor Jose “Joey” Torres showed up at U.S. Rep. Bill Pascrell’s (D-9) St. Patrick’s Day celebration tonight as if nothing were amiss; as if Pascrell and company weren’t right up against the edge of backing Torres’ rival, Council President Andre Sayegh.

The former two-term mayor found hands to shake and shook them in this crowded, kilt-replete bash at the Brownstone, an homage to old school Paterson politics where the conqueror solemnly honors the traditions of the conquered; where Pascrell walked in under chandeliers accompanied by his wife and the trudging, synchronized shriek of live bagpipes.

“I think the congressman is going to support who he sees fit,” said Torres (pictured above, right), referring to the May 13th nonpartisan election. “If he’s going to do that – get involved in a local race – it will be the first time in a long time. If he does it, more power to him. But it’s a big mistake. It sends the wrong message.

“It’s no secret he’s close to Andre,” Torres added. “Andre worked for them. There’s a relationship. But that’s an endorsement that would be based on relationships and not who’s best qualified for the job.”

Sayegh was in the room.

Pascrell’s sons entered – and his grandson.

Torres nimbly navigated the tables, hardly showing the lackadaisical streak he showed four years ago when he famously told an inquiring state Sen. Brian P. Stack (D-33) that he faced “token opposition” in the mayor’s race.

According to the story, Stack evidently stared back in silent horror at Torres that night in 2010 as he recalled the last time a sitting mayor told him he faced “token opposition.”

It was when Perth Amboy Mayor laughed off the same question Stack posed to him in 2008, just before getting upended by Wilda Diaz.

Asked how things are going this time, Torres grinned back happily.

“Rocking and rolling,” he said.

Torrres detractors in the room said he’s impaired by at least two other Latinos in the contest who are running like they want to win: Maria Teresa Feliciano and battered Councilman Rigo Rodriguez, who’s under indictment for election fraud.

“It’s just unfortunate,” the mayor said of the embattled councilman. “I keep him in my prayers. And frankly I question the timing on this – the way it comes out at election time.”

Shortly after filing the mayor’s petition signatures earlier today, Jones and company dismissed Torres as a mayor who enjoyed the advantages of a Democratic governor in Jon Corzine.

“It’s unfair to say my achievements and accomplishments are because of my relationship with the governor,” Torres shot back. “The governor didn’t appoint me to COAH [Council on Affordable Housing] because I didn’t know what I was doing. It’s safe to say that those in state government have no confidence in the governance of this city. It’s not just the state – look at the city council. They have no confidence in this city’s governance.”

Soon Torres would fade into the massive crowd with the rest as the pipes whined in unison and Pascrell and his wife Elsie and their entourage of Irishy entered the room. 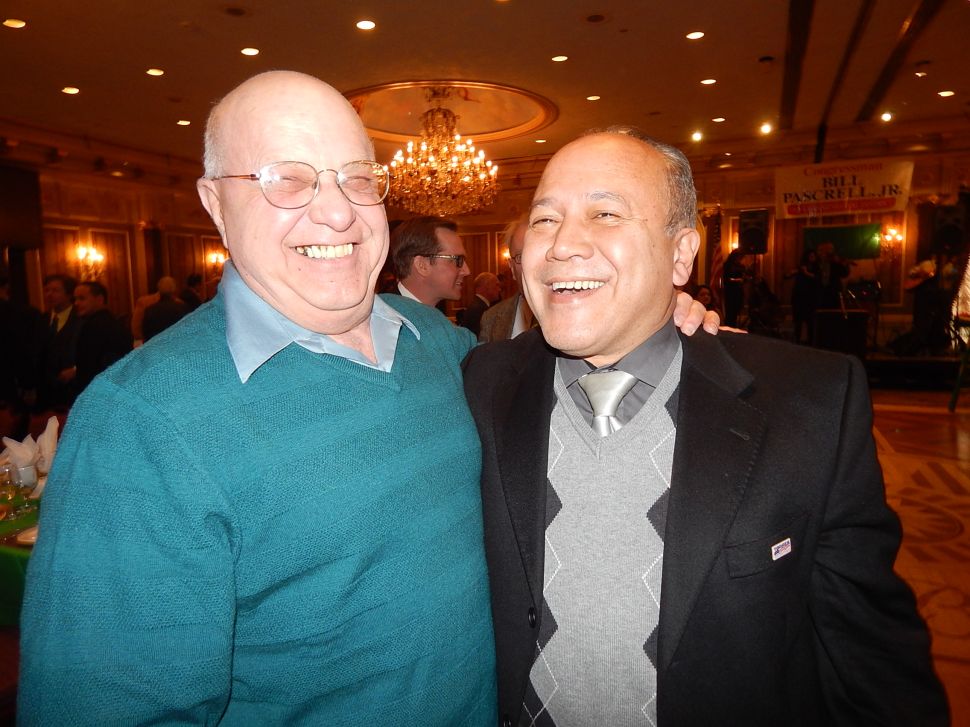