PATERSON – There’s a glossy, smiling likeness of a familiar Paterson face catacorner to City Hall approximately 15 times larger than actual size, and it belongs to the former mayor, Jose “Joey” Torres, who wants to be mayor again.

Incumbent Mayor Jeff Jones and his team say the money means nothing.

Jones beat Torres four years ago despite Torres outspending him 10-1.

“With a million bucks,” Grant added.

The point is Torres has a consistently performing base.

Now he and Jones and seven other candidates are running for the mayor’s seat.

“The more the merrier,” argued Jones, shortly after filing petition signatures during an impromptu press conference in his office.

A reporter asked him if it was hard for him to summon 1,125 signatures.

“There are always difficulties getting signatures,” the mayor said. People don’t know what they’re signing, they’re wary about signing something. Absolutely.”

“Absolutely,” he said. “My mother. She refused to sign.

A veteran of Barnes’ communications arm in the 1990s and early 2000s, Grant said Jones simply has to get his story out there in the next two months and that means the mayor must work.

Grant knows the back story in Paterson, and has paid particularly close attention over the course of the last 20 years. The city went from Frank Graves to Bill Pascrell to Marty Barnes to Torres to Jones.

“Joey, Barnes and Pascrell had the tools,” he said, referring to sympathetic state governments that showed respect to Paterson, where the state oversees half a billion in education costs alone.

“Paterson might have been able to cope with a two percent cap if the Christie Administration cooperated,” Grant said. “But the Christie administration hasn’t been focused on urban areas. Jones took on a broke city in 2010. Paterson had to lay off 125 cops.”

The gains Grant says Jones has been able to make don’t show up because of other undermining costs.

“The city has gained $86 to $95 million in economic development, but lost $320 million in tax appeals triggered by a state-required reval,” he said. “It’s like Casey Stengel said when he got to the Mets, ‘Doesn’t anybody know how to play this game?’”

The mayor this afternoon appeared ready to fight over the course of the next two months, although his detractors were already high-fiving with the news that challenger David Gilmore filed with 1,216 petition signatures, or 100 more than the mayor’s preliminary city clerk’s office offload.

Gilmore is one of three African Americans in the contest, including the mayor.

Jones said he’s running for all of Paterson.

“You saw the group of us who went to the clerk’s office,” he said. “That group was represented by Latinos, Bengalis, members from the Arabic and Moslem communities. I support and serve every member of this community. African American is what I am, but I serve all.”

Where will campaign headquarters be located?

“Close by,” Jones promised. “Just outside.” 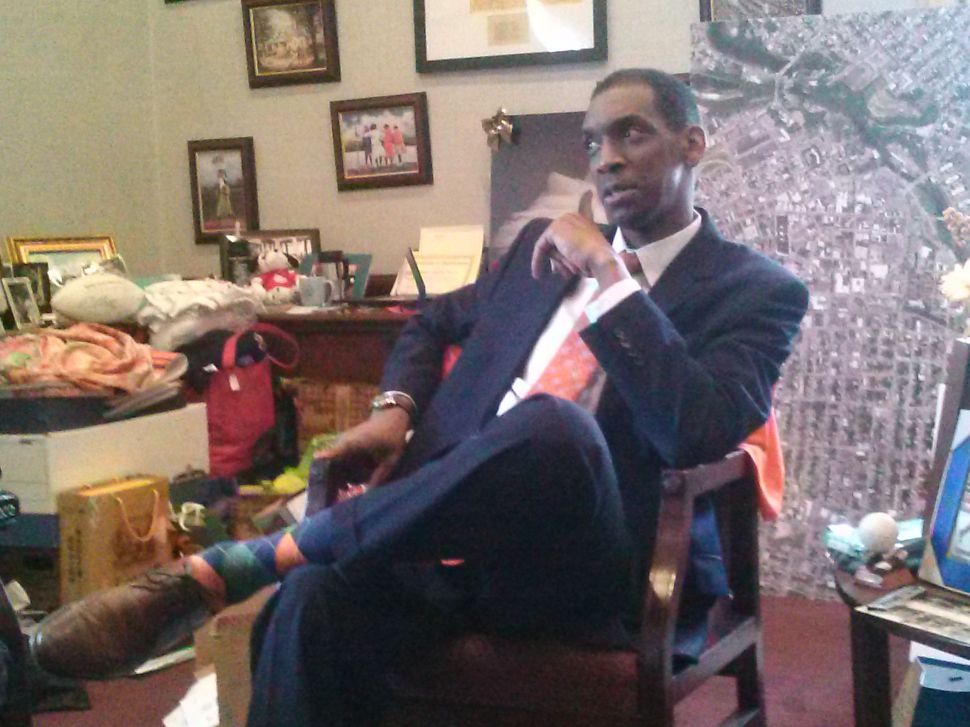