What’s in a name?

If you are Katz’s Deli, the answer is more than a million dollars. The famous Lower East Side deli is suing a brand of food carts that go under the name “Katz & Dogz.”

“Without the consent of the plaintiff, the defendants have opened mobile food trucks and a mobile and a mobile food cart under the name ‘Katz & Dogz,’ that sell the same Jewish deli foods as Katz’s Deli,” the suit states. “The Defendants actions blatantly infringe plaintiff’s federal trademark registrations and will continue to cause irreparable harm to the plaintiff’s goodwill and reputation.”

According to the suit, in one of the many back-and-forths between the two Katzes, the food cart’s representative, called only “Tarek” in the case documents, told the deli he was only trying to “pay tribute” to the New York institution.

Katz’s will have none of that. They are demanding a name change, an entire redesign of the carts’ exterior and a change to the name of the menu item “The Reuben Orgasm,” a not so subtle nod to the scene in When Harry Met Sally that was filmed in Katz’s.

Can we just point out that Katz & Dogz legitimately have the phrase “Are You Ready For The Reuben Orgasm?” plastered on their trucks. If this case falls through, we might sue them for that visual alone. 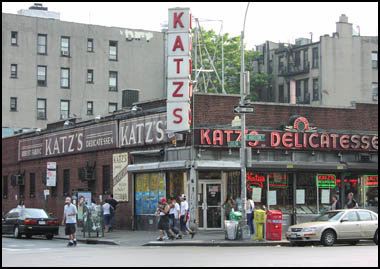