PATERSON – When they were kids, Andre Sayegh and his brother climbed the telephone pole across the street from where their mother raised them, and the late Mayor Frank Graves would walk by and tell them to find something more useful to do with their time.

Standing with his wife and baby out in front of the house where they live with his ailing mother, Sayegh said today he had found that purpose urged by Graves.

“I am announcing my candidacy for Mayor of Paterson,” he told an enthusiastic crowd of people standing on a blocked-off Dundee Avenue on this windy afternoon.

“If you want to stop people from fleeing Paterson, you have to run for mayor,” said the candidate, the local governing body’s council president, recalling discussions he had with his wife in the lead up to making his decision.

A defeated 2010 mayoral candidate who’s back with what to this point has been the tacit approval of the Democratic Party – operatives could be glimpsed in the crowd associated with the Passaic County superstructure created by Chairman John Currie and U.S. Rep. Bill Pascrell (D-9) – Sayegh stood at a podium on the narrow walk to his front porch and radiated forceful gravity.

“Two-hundred and three homicides in 12 years,” he said, fire-blanketing the tenures of former Mayor Jose “Joey” Torres and incumbent Jeff Jones in what he characterized as a three-term bundle of failure.

Jones and Torres are both in the race, along with five other candidates, excluding Sayegh.

“Too many lives have been lost,” said the councilman, who has a reputation as a wordsmith quick to elicit laughs with his addiction to puns and fun turns of phrase.

Today he indulged in none of the usual oratorical flourishes, while repeatedly invoking the seriousness of his cause. “I have that sense of urgency,” an upbeat but focused Sayegh said. “In the 6th Ward, we have taken public safety very seriously.”

Gone was the horn blaring hammy Rocky music entrance of 2010 and fake sparring match that left a good natured supporter flat on his back; replaced today by the older, married Sayegh’s promise to raise his daughter in the house where his mother raised him.

Presenting himself as a proven quality of life enhancer, he bullet pointed those instances when he took the lead to shut down local establishments where violence threatened the well-being of area residents.

He wants the power, he added, to create a Main Street special improvement district to play on Paterson’s natural ethnic flair to make Paterson into a destination, similar to New York’s Little Italy and Chinatown neighborhoods. He wants to get rid of eyesores to spark investment and remove magnets for crime.

He’s done it in the 6th, he told the crowd, and now he wants to do it citywide.

“One people, with one purpose,” the mayoral candidate urged, “one Paterson.”

It’s a variation on a message he proclaimed four years ago when Sayegh ran for mayor in a three-man contest that included Jones and Torres.

When Torres lost to Jones and people around him asked why, he gave a one word response.

Torres, sources say, believed that the 6th Ward Councilman cut into his voting base and enabled Jones to harden the city’s African American vote and win.

Some things have changed since then, giving the councilman more than a spoiler’s chance, Sayegh’s allies argue.

He’s now council president, and in that role conveys citywide oversight he lacked when he ran last time as simply another member of the council.

He also has better organizational support, starting with Pascrell’s longtime political operative Eddie Farmer, who helped turn the vote out for Pascrell in 2012. Humiliated in 2009 when Chris Christie coat-tailed GOP freeholder candidates to victory in Passaic, Currie’s squad has 2011 and Pascrell’s stunning 2012 win to build on locally and complement Sayegh’s own brand of shoe leather willfulness.

Sayegh’s allies also argue that the candidate has the advantage of being able to run against 12 years of virtual failure, a wide open field, and the potential for the other Latino candidates in the race (Maria Teresa Feliciano and Councilman Rigo Rodriguez) to pull from Torres.

They concede the irritating presence in the contest of former Ward 2 Councilman Aslon Goow, who like Sayegh wants to solidify Arab support  in the 6th Ward, but off the record they say they don’t believe the City Hall-ejected Goow can get any more than 1,000 votes.

Sayegh partisans are also convinced that their man is the only candidate in the race – half Syrian and half Lebanese – who can cross over as deftly as he does to touch all racial and ethnic groups in the city, and he has already started fundraising heavily this cycle, with an event just this past week drawing Democrats from all over the state, and another scheduled for later this month.

After Sayegh’s remarks and the hug and kiss for his wife, hewaded into the crowd and led his people to campaign headquarters on Trenton Avenue, to undertake a day of door-to-door. 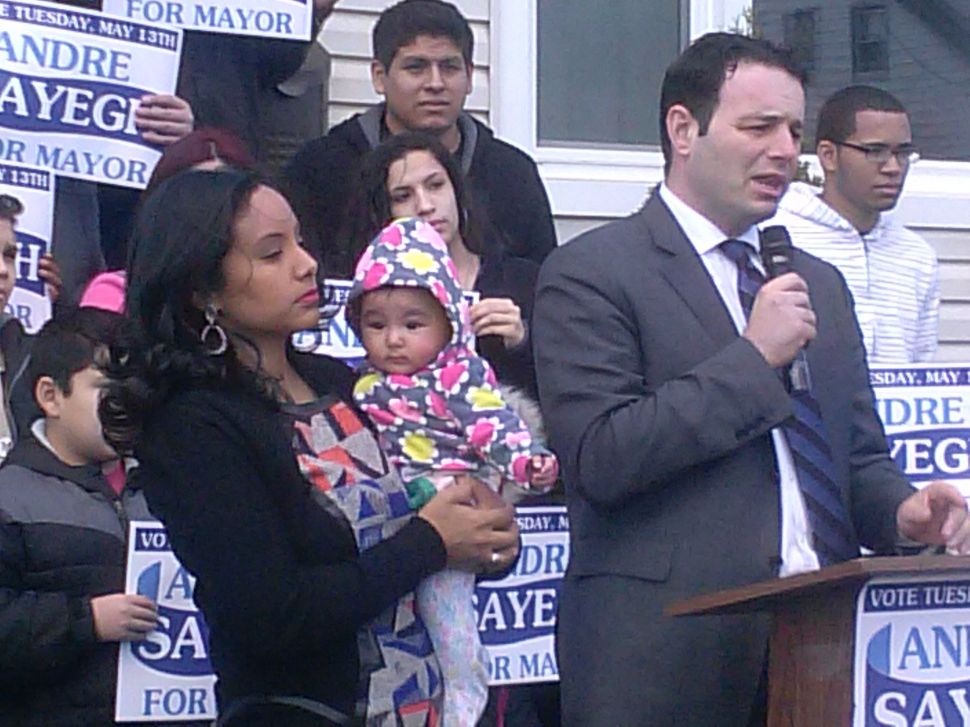