ELIZABETH – Men in orange safety vests with the initials “ILA” and “NYSA” stenciled on them in marker crowded into an overflow tent at the shipping port here and gave a collective battering to the Waterfront Commission of New York Harbor.

The longshoremen, checkers, their long-coated leaders and Democratic legislators in the shadows of stacked shipping containers and trucks at a standstill for the occasion say the commission stands in the way of hundreds of new hires.

Absorbing heaped complaints from under those tent flaps in Elizabeth, the commission, for its part, says the labor unions want to frontend load their own patronage trough of well-connected six-figure pals while foot-dragging on employing veterans, women and minorities in accord with a collectively bargained agreement.

New Jersey State AFL-CIO President Charles Wowkanech stood at the center of the rally, and said the issue’s much deeper and the commission’s role more nefarious.

“We are seeing our state’s largest economic engine essentially idled, and our port’s continued competitiveness being put at a disadvantage, because of the Waterfront Commission’s stranglehold on jobs,” said Wowkanech. “It makes absolutely zero sense why nearly 500 badly needed jobs sit vacant when both business and labor are ready to fill them.”

The Waterfront Commission says it’s actually a total of 682 new hires in question: 532 longshoremen and 150 checkers, to bulk up a ports infrastructure that supports more than 251,000 jobs statewide, with a total economic footprint of more than $40 billion.

Fifty-one percent of those new hires need to be vets, and the commission says it’s simply trying to make sure of their presence on newly negotiated payrolls.

“It’s time we put the commission into remission,” he yelled into a microphone, sending the crowd of laborers into a chant of support.

He slammed the commission as a police state and kangaroo court, and the corrupt overseers of a wasteful and redundant, in his view, security detail costing taxpayers $12 million.

“The Waterfront Commission is the closest thing we have to communism in America,” said Daggett, bundled into a topcoat amid the surging crowd and a group of supporters including the New York Shipping Association, International Longshoremen’s Association, Alliance of Automobile Manufacturers,Maritime Association of the Port of New York & New Jersey, Metropolitan Maintenance and Marine Contractors Association, NJ Motor Truck Association, NAIOP NJ, NJ Retail Merchants Association, Seafarers International Union, Teamsters, and the United Transportation Union.

Daggett also took aim at the Port Authority of New York and New Jersey – but not at the cast of characters on the New Jersey side of the Hudson hauled into Bridgegate.

He has a problem with Pat Foye, the director of the Port, who last year butted heads with then-Deputy Director Bill Baroni over intra-office communiqués Baroni wanted to keep secret.

“Pat Foye needs to stop cozying up to the Waterfront Commission,” said Daggett to cheers.

The number apparently includes mechanics and other laborers.

On the heels of Daggett’s remarks, former Governor Dick Codey, a state senator from the 27th District, went to the microphone amid scattered cries for him to run again for governor.

“Governor,” said Codey, “business and labor are together. What are you waiting for? We have the highest unemployment in the region. What we have here is a failure to communicate.

“It’s time for you to get together with the commission,” the Essex Democrat added.

Roars of approval greeted Codey, who gave a nod to his own tenure as governor, when labor problems on the dock of the sort confronted today didn’t exist, he said.

He wants to abolish the Waterfront Commission, and attempted to drive legislation in that vein as recently as two years ago.

“I was right then, and I’m right now,” said the senator, backed by Assemblyman Joe Cryan (D-20) and Assemblywoman Annette Quijano (D-20).

Passing the microphone back to the AFL-CIO prez at one point, the well-received Daggett good naturedly mangled the labor leader’s name amid laughter and said, “Wowkanech. That’s Polish. You know how Polish people get to heaven, Charlie? They take the Pulsaski Skyway.”

As the crowd spilled out and back to work, an insider told PolitickerNJ that the issue finally rests in the hatred that the commission and unions have for each other.

“Deep, abiding hatred,” was the assessment, against the backdrop of ongoing legal fisticuffs.

The union members believe, and this is according to a frontline ally, that the commission wants to break them, and will use any device it can to that end: including women, minorities and vets.

In a statement issued after the rally, Waterfront Commission Counsel Phoebe Sorial affirmed the Commission’s dedication to putting people to work in the Port, in a fair and
nondiscriminatory manner, as quickly as possible.

“The Commission has not been the source of any labor shortages or slowdowns in the Port,” Sorial said. “To the contrary, we have openly criticized the glacial pace at which the NYSA is moving with regard to getting longshoremen sponsored and working in the Port.

The Commission has also offered a diverse prequalified pool of labor assembled from government employment centers in New York and New Jersey, to alleviate any immediate labor
shortages. Those individuals, once described by ILA President Harold Daggett as ‘garbage,’ were summarily rejected. This statement is illustrative of why there remains an incredible lack of diversity in waterfront employment, which has led the New York State Division of Human Rights to file a complaint against the NYSA, ILA and ILA Locals, and the Metropolitan Marine Contractors Association (“MMMCA”). The Commission is clearly not the only agency that is deeply troubled by the ILA’s referral practices and the NYSA and MMMCA’s employer
sponsorship system, which have caused a disproportionate number of minorities and women to be excluded from union membership and employment opportunities in the Port.

“Rather than “destroy” the NYSA and ILA’s collective bargaining agreement, as contended by Harold Daggett in today’s statement, the Commission applauded the industry’s hiring plan, which calls for 51% of those hired to be returning veterans, as long as that plan was truly implemented in accordance with its terms. However, over the past several months, the NYSA and ILA have demonstrated that they are, once again, incapable of hiring in a fair manner. Instead of recruiting and hiring military veterans, as promised, they have dedicated most of their efforts to employing and training their own referrals, to the severe disadvantage of the veterans. As a result, the Commission has had to forcefully advocate on behalf of those veterans who are simply waiting for the NYSA and ILA to put them to work in the Port.”

But Wowkanech and his labor allies maintained that the Commission has repeatedly forced delays, forcing an increasingly dire situation in the lead up to  April 1, when an estimated 300 workers will retire through an early retirement incentive offered in the latest collecting bargaining agreement. 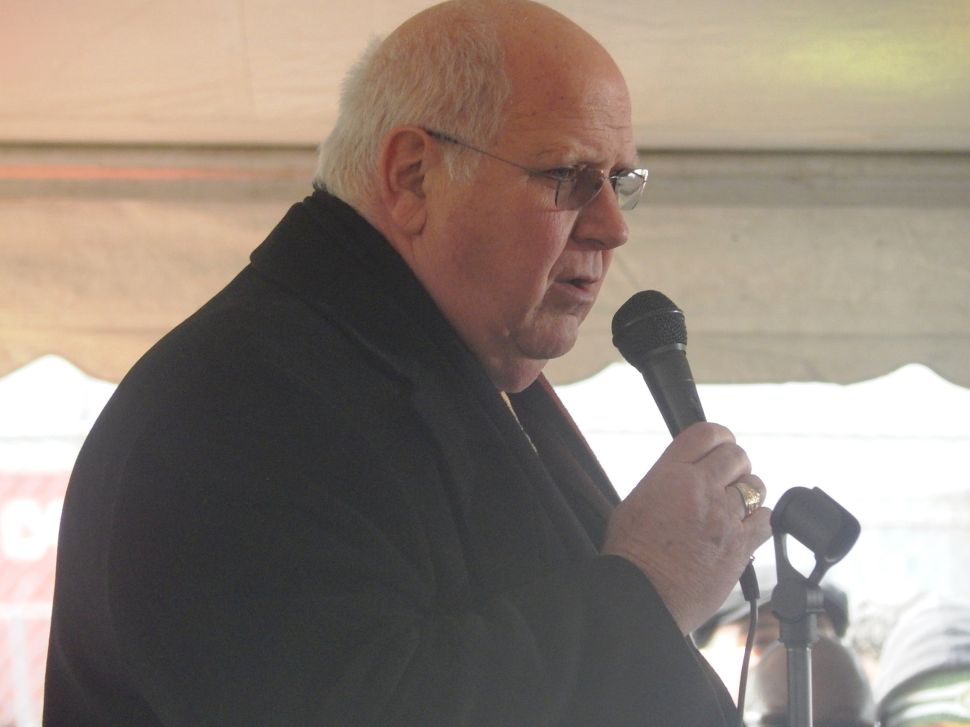