(The following post should be read in the voice of Hannah Horvath.)

Honestly? We’re so, so excited about Lena Dunham hosting Saturday Night Live this weekend, and we would never want her take this as anything less than, you know, the best kind of compliment to give someone, but it’s like she’s so good at doing her one, very specific thing. And not that we don’t totally believe that she can actually act like someone other than a character that she has written as a sort of messy doppleganger for her own real-life persona, because she is a strong, powerful woman who is so, so talented, but sketch comedy is just supposed to be really hard. Like this one time we got a part in our middle school improv team, but then totally peed onstage during our first performance because of a urinary tract infection, but at the time, we just thought we had vaginal cancer. And we were like 10.

It’s like even in these promos with Kate McKinnon, the funniest parts are the bits that are written to sort of satirize Lena’s role as a writer/director/producer and how she needs to have total control over the wardrobe and a tighter shot and also McKinnon needs to bring up her vulnerability, you know? I guess we’re just wondering if she can do that for an hour. How many GIRLS-as-X (woodland creatures/cars/snack foods) sketches can there possibly be in the world? 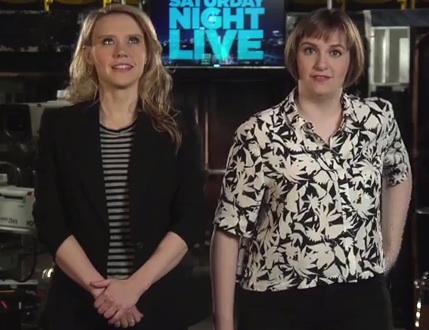