[youtube http://www.youtube.com/watch?v=6PC3JS-1w-k&w=560&h=315]
There’s a moment in this preview for Oprah’s new documentary, Lindsay, where you wonder what it is that you’re watching exactly. Is this just another faux-concerned exploitative series about a troubled celebrity? Since Oprah hired Emmy-nominated filmmaker Amy Rice (and because she’s Oprah), we really don’t want to believe that this is another The Two Coreys, or Celebrity Rehab or even Living Lohan.

We want to believe this isn’t the case because it’s Oprah, but what other explanation for this train wreck could there possibly be? The trailer opens, and we see La Lohan trapped in her own home, feeling like a “prisoner” whose every terrible moment has been dutifully captured by the paparazzi and tabloids. (Maybe she should talk to Alec Baldwin or Shia LaBeouf about that.) We might feel some twinges of sympathy, but be careful—it’s a trap!

We learn very quickly that Lindsay is not going to be a story of redemption. We know that because documentaries deal with real-life subjects, and though Lindsay Lohan hasn’t been full-on crazy in a while, we know she’s not totally healthy, either. Just look at her.

Lindsay is going to be a deep-delve then, not into how bad the actress is, but how unfortunate it is to be around toxic people like Lindsay Lohan, who just don’t seem to want to help themselves. Just look at poor Oprah, who gave the actress (?) $2 million to make this miniseries, only to find out that Lindsay was not showing up, delaying shoots, locking herself out of her own apartment and costing the crew days of work—you know, all the things you’d expect from a mentally ill, former/current drug addict with a history of bad behavior. It’s not like Oprah couldn’t have seen this coming.

So what it comes down to, then, is this come-to-Jesus moment where Oprah dispenses some tough love and tells Lohan that she needs to “Cut the bullbeep, you really do.” We know, without seeing the rest of the movie, that Lohan will have at least a slight conversion, because she was allowed to keep the millions, which was contingent on her finishing the film and Oprah not calling off the project.

So we can’t help but feel a little manipulated. It’s a vanity project for Oprah, who is doing some weird Dr. Drew thing of rehabbing her pet project, Lindsay Lohan. It’s good press: If she can’t clean up Lindsay, then the woman is definitely beyond saving, in which case Lindsay will serve as a testament to just how messed up the Lohans are. Just because it’s Oprah, a miniseries and a well-known filmmaker doesn’t mean that this isn’t the kind of celeb train wreck trash that really defines the lowest rung of our society’s entertainment.

We mean, we’ll definitely watch it. But we’re going to feel really shitty doing so. 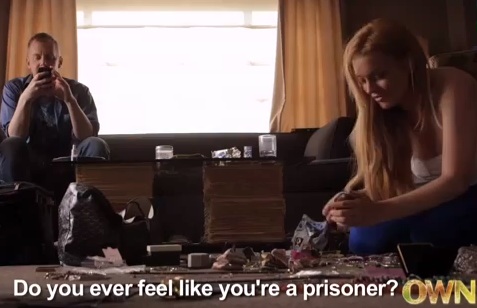