City Council Speaker Melissa Mark-Viverito was on her way to City Hall from her home in East Harlem this morning when she noticed Twitter erupting with early reports of a massive explosion that had rocked her district, leveling two buildings and leaving at least two dead and 22 injured, according to fire officials.

“I left my home at about 9:15, 9:20. I was on my way to City Hall when I started seeing some activity on Twitter from constituents that had heard the explosion or had been rocked by the explosion, some that live on 118th Street. So I turned around, came uptown,” Ms. Mark-Viverito told the Observer after an emergency briefing this afternoon a block from the site, which remains ablaze.

“Obviously it’s an extremely anxious time for the constituents that live here, for the families that have been impacted,” she told reporters earlier, standing next to Mayor Bill de Blasio, who described the incident as a “tragedy of the worst kind.”

The apparent gas explosion at the corner of East 116th Street and Park Avenue leveled two buildings, spewing debris and thick black smoke into the street, and caused extensive damage to surrounding buildings just five blocks from the new speaker’s home and “literally half a bock” from her district office, which was not damaged by the explosion or ensuing fire.

Ms. Mark-Viverito said that after returning to the district, she and her staff moved to turn the office into a makeshift command post for first responders and a place where those affected to turn for help.

“We opened our doors. The responders are here,” she said. “We have made our office available as a command post for them. Anyone that lives in the surrounding area that is looking for more information, the people have availed themselves to our office and the NYPD and FDNY is using it as they need.”

She also heaped praise on the more than 250 firefighters and other emergency workers who descended on the scene after the explosion at around 9:30 a.m. “They have been an incredibly, incredibly responsive group of responders and I’m extremely grateful,” she said.

Ms. Mark-Viverito further vowed to spend the coming days helping the city’s agencies work together, both to respond to victims and their families as well help people who have been displaced.

“We’re interacting with some of the impacted families, trying to assure that they get all the proper support possible,” she said. 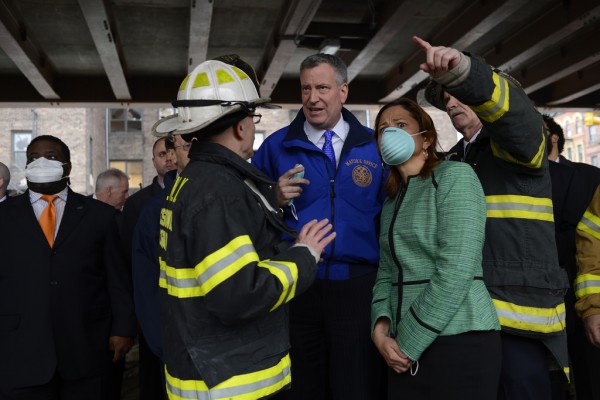