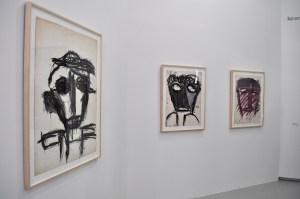 Tucked away in a corner on the Independent Art Fair’s third floor, Martos Gallery has on display a mere three pieces, all drawings from Dan Asher’s estate. Though the collection is small, it packs a punch. The drawings, made with oil stick on paper and completed between 1980 and 1983, depict expressionistic, melancholy and energy-infused masks.

The Chelsea gallery began working with the estate after the artist’s death at the age of 63 in 2010, and has since displayed his works at fairs in Los Angeles and, now, New York. They’ve planned their first show with the estate for later this year, director Taylor Trabulus said, because Asher “was such a key player in the Lower East Side, so many people know him, so we wanted to bring his work out of that area” and to a wider audience.

Not that they haven’t succeeded in that already. Ms. Trabulus had just finished closing a deal (each costs between $15,000 and $18,000), and said the fairs have allowed Martos to sell his work to private and public collections in New York, Los Angeles, Michigan and abroad.