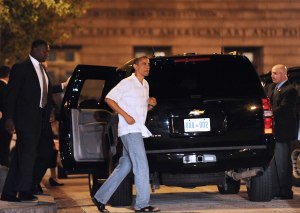 The president really is a fan of Glenn Ligon. [The Independent]

Here are photos of that DIS diffusion line designed by artists. [The Cut/New York]

Carolee Schneemann: ‘I never thought I was shocking.’ [The Guardian]

“Venice Biennale to open in May, a month earlier than usual next year, and fairs may move to avoid a clash.” [The Art Newspaper]

Here’s a profile of Bill Viola ahead of his big show at the Grand Palais. [NYT]

Here’s a profile of Emmanuel Perrotin in which he says that he
recently considered closing his gallery. [W magazine via Art Market Monitor]