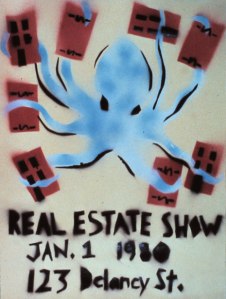 John Baldessari, Barbara Kruger and Catherine Opie, who all resigned from L.A. MOCA’s board during Jeffrey Deitch’s tenure as director have returned. Mark Grotjahn is also joining the group. [Los Angeles Times]

Richard Prince and Patrick Cariou have reached a settlement in their long-running legal battle. [NYT]

“A French family is petitioning for a referendum in a Swiss city in its efforts to regain a painting by John Constable that was seized during World War II.” The museum actually admits the work was looted, but says that it accepted the work in good faith and is not obligated to return it. [NYT]

James Fuentes will look at the legendary 1980 “Real Estate Show” next month. [The Lo-Down]

Some amazing documentation of, and reportage from, “The Real Estate Show.” [98Bowery]

Katrín Sigurðardóttir discusses the work she made for the Icelandic Pavilion at the Fifty-Fifth Venice Biennale, which is now on view at the Reykjavik Art Museum and will soon travel to SculptureCenter. [Artforum]

“Who Had Richer Parents, Doctors Or Artists?” [Planet Money/NPR]

Tayeba Begum Lipi, who got a lot of attention for her razor blade bra piece at the Venice Biennale last summer, gives an interview on the occasion of her first London show. [Financial Times]