Last night on Staten Island, Bill de Blasio made a hard pitch for Domenic Recchia‘s congressional campaign. “Domenic M. Recchia Jr. — look for him on your ballot,” the mayor said at one point, according to the Staten Island Advance. “He will serve Staten Island so well, with such great energy,” Mr. de Blasio argued. “He cares about people.”

From the same article: “As the media were escorted out before the dining began, there’s no way of knowing whether the mayor had another fork faux pas akin to his gaucherie at Goodfella’s a few months back.” The Advance also did a deep dive into Mr. de Blasio’s St. Joseph’s Day menu that evening.

Meanwhile, the New York Post reports Mr. de Blasio’s seemingly impromptu snow-shoveling photo-ops were scheduled in advance: “Hizzoner’s schedule, obtained by The Post under a Freedom of Information Act request, shows the snow clearing was blocked out beforehand — and even planned from the outset to include his popular son’s cameo.”

The Post‘s editorial board isn’t so sure about Mr. de Blasio’s $98-million settlement over racial discrimination claims against the fire department: “[T]here’s a new team at City Hall. And we can already see the result: activists setting policy for our uniformed services — and a Law Department that serves as an ATM dispensing public funds to plaintiffs.”

Asked about businessman Ken Langone comparing the mayor’s populist rhetoric to Nazi Germany, Mr. de Blasio rhetorically shrugged. “At a certain point some comments are just hard to take on face value,” he said yesterday. “Let’s face it– if you’re focused on fighting inequality, some people are not going to like that.”

And, asked about Mr. de Blasio’s policy agenda on NY1’s Inside City Hall, ex-Senator Al D’Amato went on a riff about Liam Neeson. “Who was this big movie star about the airplane stopping? Liam what?” he asked. “Alright, I don’t even know how to pronounce that; I’m an Italian boy. I got on a horse once and I said to God, ‘If you ever get me off here alive…'” 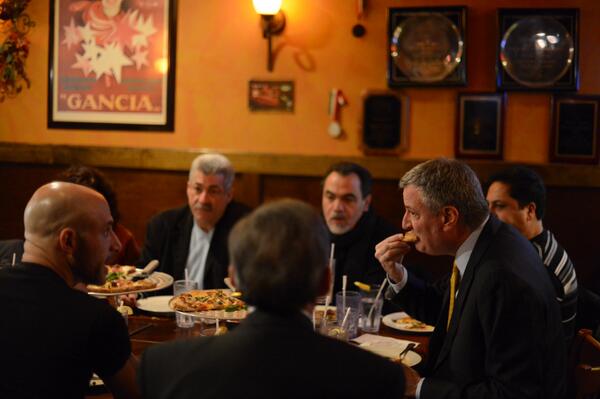