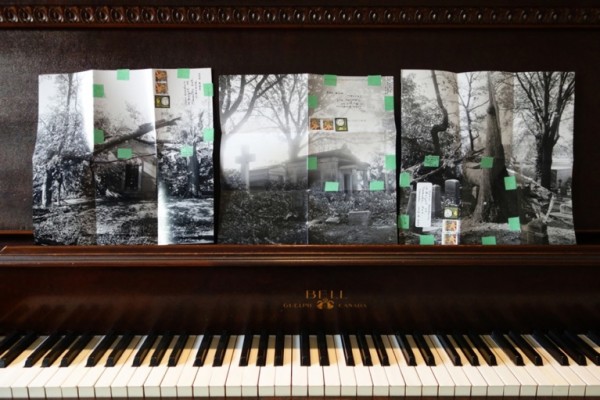 Moyra Davey’s Outtakes, a series of 10 unique C-prints hung at eye level in two rows of five, begins with a profile of Abraham Lincoln, stamped into copper and surrounded by green and rose static and a few bulging letters. Ms. Davey folded the photo into sixths, taped it shut, wrote her New York address in the corner and mailed it to gallerist John Goodwin in Toronto. Unfolded again, the photo is left with eight squares of orange tape framing its canton and three postage stamps—one showing an eagle atop a clock and two a detail of Rockefeller Center—hanging from the president’s ear like a tribal earring. The other nine photos are also close-ups of pennies, but each is slightly different. In one, the column of stamps hangs from his mouth like a Fu Manchu mustache, with a square of tape under his nose like a concurrent Charlie Chaplin; in another, a stamp of a Man Ray photo displaces the “American Clock.” The Great Emancipator is occluded by rusty scratches, smoothed with age, and besieged by salty encrustations before rising again, red and angry, from out of a sea of poxy green. Symbol succeeds token, collapse becomes recurrence, image replaces letter, and ideas are passed from hand to mouth until, in the anonymous immortality of coinage, the discreet supremacy of the transient is revealed.

Ms. Davey disentangles fame, identity and death still further in Ornament and Reproach, a study of the weirdly aggressive tombstone that former Mayor Ed Koch designed for himself, along with a kaleidoscopic view of Trinity Church’s cemetery in Washington Heights, where the tombstone rests. Built before upper Manhattan was leveled, the bucolic cemetery rises like an undigested memory between Amsterdam Avenue and the river, girdled in stone walls, covered with snow and filled, after Superstorm Sandy in 2012, with toppled trees.