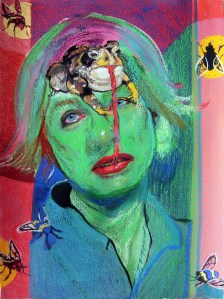 The painter Natalie Frank is now represented by Rhona Hoffman gallery in Chicago and ACME in Los Angeles. She will have a large painting with ACME at the Armory Show, which opens this week. Her first solo show with Rhona Hoffman is scheduled for this coming September.
In New York, the following April, she will have a solo show at the Drawing Center centered around her interpretations of Grimms’ Fairy Tales. Her last show in New York was at Fredericks & Freiser, her New York gallery, in 2013.