If you recall the view of near-future New York City in Will Smith I Am Legend, than this will feel like déjà vu.

A new Google Street View hack by Swedish developer Einar Öberg allows viewers to see New York and other cities transformed into urban jungle. By combining undocumented depth data of Google Maps API and traditional maps, the site shows plant life growing in and around buildings of cities around the world.

“It works best in environment with large buildings surrounding the streets,” Mr. Öberg explained. “Some locations need a little more imagination than others.”

The iconic Google Street View Pegman was morphed into a miniature Indiana Jones, fedora hat and fire torch at hand. And when dropped on a location, a speech bubble above the Pegman reads: “I hope there will be no snakes.” Currently, the site is accessible through Firefox and Google Chrome browsers and viewers may only experience the urban jungles of already available Google Street View locations by clicking the stone-like arrows to move about.

Mr. Öberg was inspired to create the hack while playing the action-adventure survival horror game Last of Us on PlayStation3. “It’s a post-apocolyptic world for sure, but it’s just nice to get some green vegetation into the concrete cityscape,” he told the Observer. “It’s just a side-project that took up some hours a day for about two weeks. It uses existing libraries so the open source community did much of the ‘ground work.'”

This is one of many Google Street View hacks, including the 2011 Street View Zombie Apocalypse game where players must escape from zombies placed around the maps. “Let’s hope the server can manage the load, people seem to like it!” Mr. Öberg said.

Don’t believe us? See Times Square for yourself, covered in vines, bushes, and trees-oh my! 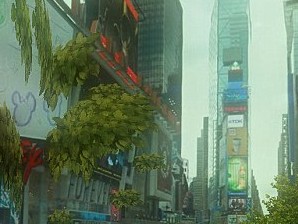