NEWARK – Newark mayoral candidate Shavar Jeffries came to El Flamboyan Manor in Newark’s North Ward to accept the endorsements of state Senator Teresa Ruiz (D-29) and state Assemblywoman Eliana Pintor-Marin (D-29) on Saturday. Ruiz and Pintor-Marin are from the North and East Wards respectively, two wards where Jeffries is counting on a high level of support in the May municipal election. But in remarks to the more than 300 people in the crowd, Jeffries asked Newark voters to look to another ward before they go to the polls in 51 days.

“We want the whole city to be strong and vibrant. But if you want to know what this city will look like if we don’t do what we need to do in this election, drive through the South Ward any time of the day,” said Jeffries, a South Ward resident, referring to the leadership of South Ward Councilman Ras Baraka, his main opponent in the Newark mayoral race. “I’ve got to call my wife when the sun goes down to make sure she’s OK, and we’ve got to tell our babies to go in the house. It’s a disgrace. And if we want this city to look like what it looks like in the South Ward, elect the person who presided over that for the last four years.”

Jeffries’ continued hammering of Baraka’s record in the South Ward, where Jeffries, the former state Assistant Attorney General, has pointed to a 70 percent increase in murders during Baraka’s time on the city council, was augmented by an air of increased confidence in the Jeffries campaign.

Jeffries’ endorsement on Tuesday by U.S. Rep. Donald Payne Jr.(D-10) gave the mayoral candidate support from one of Newark’s most prominent political families and helps to deflect attacks from the Baraka campaign that try to paint Jeffries, a Newark native, as an outsider.

Saturday’s endorsements from Ruiz and Pintor-Marin help Jeffries consolidate his predicted support in the North and the East Wards, votes that will be critically needed to mitigate Baraka’s perceived support in the South and West Wards.

Sources have told PolitickerNJ.com that if Baraka were to prevail over Jeffries, both Pintor-Marin and Ruiz could be targeted by Baraka allies in the 2015 and 2017 state legislative elections, respectively.

Coming off the El Flamboyan stage, with the DJ blasting songs from Puerto Rican salsa singer Hector Lavoe moments after they endorsed Jeffries, Ruiz and Pintor-Marin told PolitickerNJ.com that the bull’s-eye wasn’t on them.

“I don’t respond to threats,” Ruiz said. “I work for the people, and in four years the people will make that decision. This is all about respecting choices and the personal choice that I’m making.”

“The East Ward and the North Ward have a partnership,” said Pintor-Marin. “It’s about getting done what is necessary to be done.”

As for Jeffries, he looked towards strong support in the North and East Wards in the critical weeks ahead, and beyond.

The other third of the LD29 team, Assemblywoman L. Grace Spencer, issued a statement of neutrality in the mayor’s contest.

“At this time it is being alleged that candidates involved in the upcoming municipal elections have violated a municipal ordinance which precludes the hanging of signs on public property,” Spencer said. “As the chief municipal prosecutor I am responsible for prosecuting those candidates and individuals violating the municipal ordinances. To maintain the integrity of the Office of the Municipal Prosecutor, I will not endorse any persons participating in this election.” 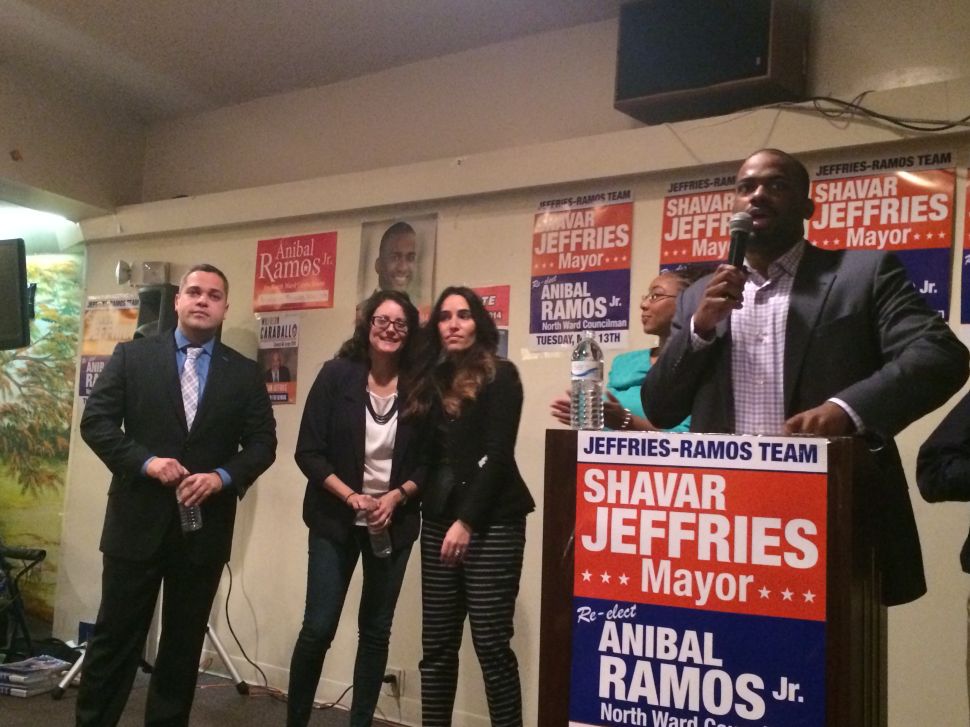