NEWARK – Newark mayoral candidate Shavar Jeffries lashed out at rival Ras Baraka for what he claims is a wrong-headed stand on an idea that has become a political buzzword: regionalization.

Regionalization is a policy initiative that has gained traction in New Jersey, the state with the highest property taxes in the nation. Advocates for regionalization hope that more shared services and the potential consolidation of the state’s 565 municipalities could lead to taxpayer relief. Last month, Gov. Chris Christie proposed $8.5 million be set aside in the state budget to reimburse local governments engaged in consolidation and shared services.

During a event sponsored by the Newark Regional Business Partnership last week, both Jeffries and Baraka spoke before members of the city’s business community.

“We have to regionalize the city to work with Jersey City, Elizabeth, Paterson, East Orange and Irvington to begin to talk about how do we exchange jobs and how to do we share services,” Baraka, Newark’s South Ward Councilman, said at the event.

On Tuesday, Jeffries doubled back to Baraka’s comment, saying that Baraka supports regionalization to an extent that will hurt the city’s future.

“It sounds like Councilman Baraka is talking about regionalization similar to what happened to the Camden Police Department,” said Jeffries, the former state Assistant Attorney General, referring to the disbandment of the South Jersey police force last year. The city of Camden is now policed by the Camden County Police Department. “Clearly, if you regionalize, there is going to be a layoff of Newark workers. We cant afford to have more cops laid off right now. During Mr. Baraka’s time on the council, the city laid off about 170 cops, which has led to our streets being much more dangerous than they need to be.”

Despite the the estimated $30 million budget deficit looming over the state’s largest city, Jeffries maintains that he will be able to find funds to hire more police from “some fat” found in budget appropriations for the city council and the city clerk’s office.

“We’re going to reinvest in our police, fire and sanitation departments, not lay people off or eliminate critical departments,” Jeffries said. “The city of Newark is the largest city in the state of New Jersey. If you regionalize core services, we’re not going to have the kind of dedicated attention we need to meet our extraordinary challenges.

“You do need regionalization in other places,” added Jeffries, pointing positively to the merger of the schools systems of neighboring South Orange and Maplewood. “Our scale is too large for regionalization. What we need to do in Newark is manage our budget more wisely.”

“Shavar Jeffries is shooting from the hip and doesn’t know what he is talking about to dismiss all possibilities of regional services out of hand,” countered Baraka campaign communications director Frank Baraff. “Off the top of my head, I can think of several examples of how shared services could make sense in our region. But more to the point, before any regional shared services do take place, there are always extensive management and economic studies to determine feasibility and costs. If Shavar Jeffries has any studies that show that shared services are not feasible, I want to see them.” 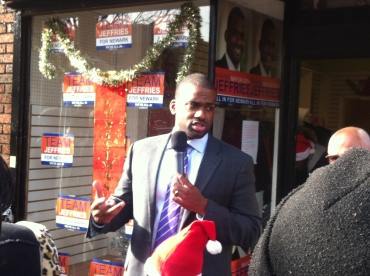