NEWARK – Wilfredo Caraballo, one of the at-large candidates on Newark mayoral candidate Shavar Jeffries’ slate, is not new to Newark’s political rodeo. But when he expressed his frustration about accusations from the camp of rival mayoral candidate Ras Baraka that Jeffries somehow lacks Brick City authenticity, Caraballo went back to the farm.

“If you read the papers…Shavar, we should quit right now because the other side has won. I don’t understand something. If you put lipstick on a pig, what happens? It’s still a pig,” Caraballo, a former state assemblyman, said on Saturday, mockingly referring to Baraka. “Don’t keep trying to tell me, or anybody, that Shavar Jeffries isn’t real Newark.”

Caraballo continued this riff to a crowd of about 75 Jeffries supporters inside of the candidate’s South Ward headquarters on Bergen Street, referring to Baraka’s late father, the famous poet Amiri Baraka.

“Wouldn’t it be nice to be able to say that Nina Simone played the piano at your home? That Maya Angelou read poetry with you? I don’t know too many people who were born in Newark who can say that, who didn’t have a hard day in their life,” Caraballo said. “Before the age of ten, [Jeffries’] father wasn’t in his life, his mother had been killed, but he’s not real Newark.”

Caraballo’s comments underscored some of the frustration within the Jeffries campaign as the momentum in the race to run New Jersey’s largest city seems to be turning in Baraka’s direction.

Baraka has been endorsed by a slew of labor unions in recent weeks, including the Fraternal Order of Police on Friday, as well as Jersey City Mayor Steve Fulop, a potential Democratic gubernatorial candidate.

An anticipated press conference that was to be held Monday by the Jeffries campaign involving U.S. Rep. Donald M. Payne, Jr. (D-10) and Essex County deputy chief of staff and former state Assemblyman William D. Payne, members of one of Newark’s most prominent political families, was cancelled hours before its scheduled start.

PolitickerNJ.com spoke to Baraka at Newark’s Saint Patrick’s Day parade on Friday, asking him if he did triumph in the May election, would he consider offering Jeffries a spot in his administration.

“Shavar is a smart guy. He’s connected to the Attorney General’s office. We definitely need good leaders,” said Baraka, wearing a green tie. “I would absolutely invite him to be a part of moving the city forward.”

But Jeffries, who attended the Newark firefighters’ pre-parade breakfast at the Kilkenny Alehouse, apparently drew inspiration from the portrait of Irish rebel leader Michael Collins fixed to the bar’s wall as he shot down Baraka’s invitation.

“Nothing has changed the fact that Councilman Baraka has a failed record in the South Ward,” Jeffries said, pointing the high crime rate in Baraka’s neighborhood. “We’re getting an amazing response from the voters in every community. External actors are supporting my opponent, but they’re not going to win this election. I would love for Councilman Baraka to work with me.”

On Saturday, Jeffries, with his wife Tenagne and children Caleb and Naomi by his side, pointed out of the storefront headquarters window to the street forming the next corner, Harding Terrace, where he grew up.

“This is home,” Jeffries said. “Our city is in a state of crisis right now. There were 111 murders in this city last year. Families are afraid to let their children play outside when the sun goes down. Unemployment is twice the national average. The foreclosure rate is destroying our communities. What all those big numbers mean is that regular moms, dads, babies and teenagers are not able to the have the fullness of the life that God has created them to have. That is a tragedy, and each and every one of us has an obligation to do something about that.

“It’s an absolute embarrassment what’s going on here in the South Ward. All I hear from [Baraka] is they, they, they. Fill in the blank who they are,” Jeffries added. “White people, Trenton, Republicans, [Gov. Chris] Christie, Shavar, [Christie-appointed Newark Schools Superintendent] Cami Anderson, [former Newark mayor and now-U.S. Senator] Cory Booker. All of our problems are because of they. That doesn’t mean that we don’t have a critique for these varied externalities. But it’s very disempowering. What about we? What about us? We love ourselves, and we can do a lot more right now if we first believe in own capacity. They are irrelevant.” 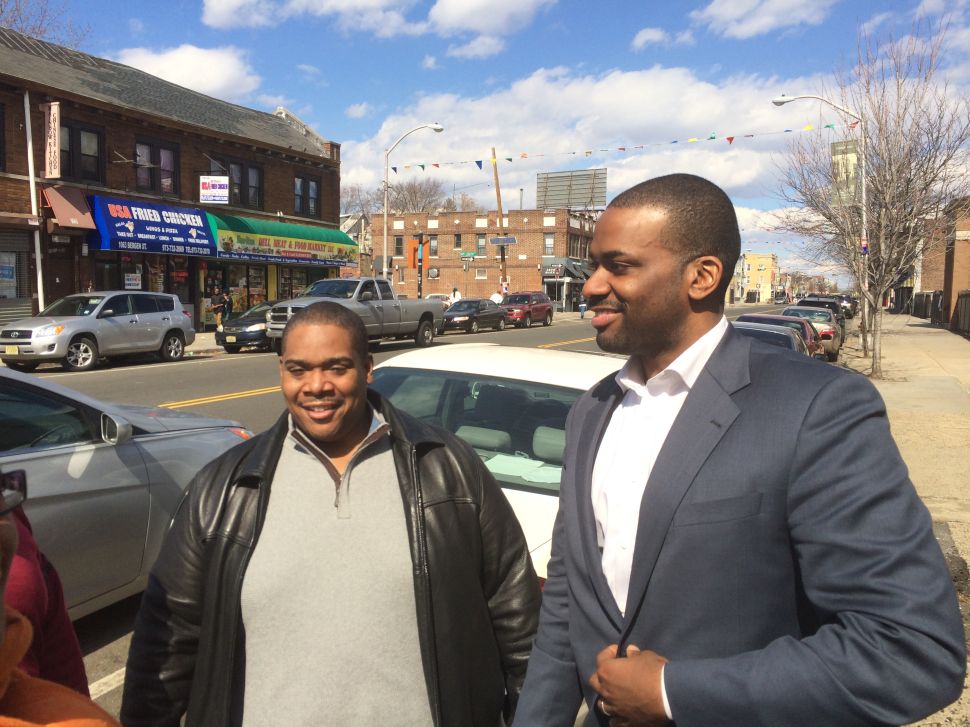