“After months of consideration, discussions and thinking about the future of the city of Newark, I’m here today to endorse Shavar Jeffries for Mayor,” said Payne Jr. “Being born and raised in the City of Newark, I have to follow my conscience. This is not about politics. This is about what I think is best for the City of Newark at this time. As a former city council member, council president, Essex County freeholder and now a member of Congress, I have a deep understanding of what kind of leader Newark needs and its residents deserve.”

Payne expounded on Jeffries’ deep roots in Newark, including his family’s five generations living in the city, as well the tragedy of the murder of Jeffries’ mother when he was a boy. He also lauded Jeffries’ law enforcement work with the state Attorney General’s office, overseeing a team that produced a 26 percent reduction in recidivism of ex-offenders, as well as his work as a member of Newark’s School Advisory Board.

Payne cited Jeffries’ experience, including his education at Duke University and Columbia Law School, as further reasons for his endorsement.

“[Jeffries] felt that it was important to come back and use those skills and talents for the community that raised him and showed him love growing up,” Payne Jr. said.

Payne Jr.’s endorsement inevitably must be seen through the prism of old-time Newark politics. The Payne family has had a decades-long rivalry with that of Jeffries’ rival in the race, South Ward Councilman Ras Baraka. The Paynes and Barakas, two Newark political dynasties that share the same South Ward fiefdom, are now in direct conflict following Payne Jr.’s endorsement of Jeffries.

Payne Jr. noted that he had communications with famed poet and activist Amiri Baraka, the candidate’s father, during the poet’s fatal illness, and admired Ras Baraka personally. But he stood by his decision to back Jeffries instead of Baraka in the May municipal election.

“This is about issues,” Payne Jr. said. “This is not about personalities. There are several [people] who advised me to stay out of this race. They told me to not get involved in local races, remain neutral. But this is about what the people of this city and my district elected me to do. To ask someone to sit out when you’ve made your decision is unconscionable and shows a lack of leadership.”

When asked by PolitickerNJ.com if he now felt targeted by Baraka, as well as the labor unions, that have lined up behind Baraka when the congressman run for re-election in November, Payne seemed sparked by the memory of his late father, longtime Congressman Donald Payne Sr..

“I’ve thought about it long and hard, and I’m doing it because it’s the right thing to do,” Payne Jr. said. “You have to stand up, and I had a great teacher. When it comes time for the community to look at me, [I think they’ll say] you know what? He’s doing exactly what we’ve asked him to do, so he should be able to go back to Congress.”

“There have even been threats. I’m usually a pretty even-keeled guy, but don’t start pointing your finger at me,” Payne Jr. added. “I hear people running around saying ‘You better not.’ I think that’s the worst course to take with me.”

Standing on the sidelines of the Payne press conference was Amiri “Middy” Baraka Jr., Ras Baraka’s brother and campaign manager.

“No comment,” Baraka Jr. said when asked about Payne Jr.’s endorsement of Jeffries, his eyes fixed on the congressman.

Jeffries also offered no comment at the Robert Treat Hotel event on Monday, because he was not there in person. Subsequent calls to Jeffries and the candidate’s campaign seeking comments were not immediately returned.

“He’s out doing what he needs to do. There is no reason for him to be here today,” said Payne Jr., who noted he would be “active” in campaigning for Jeffries, about the candidate’s absence. “I can handle an endorsement on my own. I’m sure he had better things to do.”

Patrick Murray, director of the Polling Institute at Monmouth University, found it “stunning” that Jeffries was not present for Payne Jr.’s endorsement. But Murray noted that the impact of the endorsement in the race to run the state’s largest city could be significant.

“There is a lot of good will for the Payne family in Newark, so this is definitely going to help Jeffries. It will legitimize him against the attacks Baraka is landing fairly successfully on him that he’s really an outsider, even though he was born here,” said Murray, who came to watch the endorsement event. “Payne helps give Jeffries that legitimacy that he’s a part of the Newark fabric. And the Payne-Baraka rift will probably continue for a while. Unless the Baraka slate wins and pushes the Paynes out of Newark city government.” 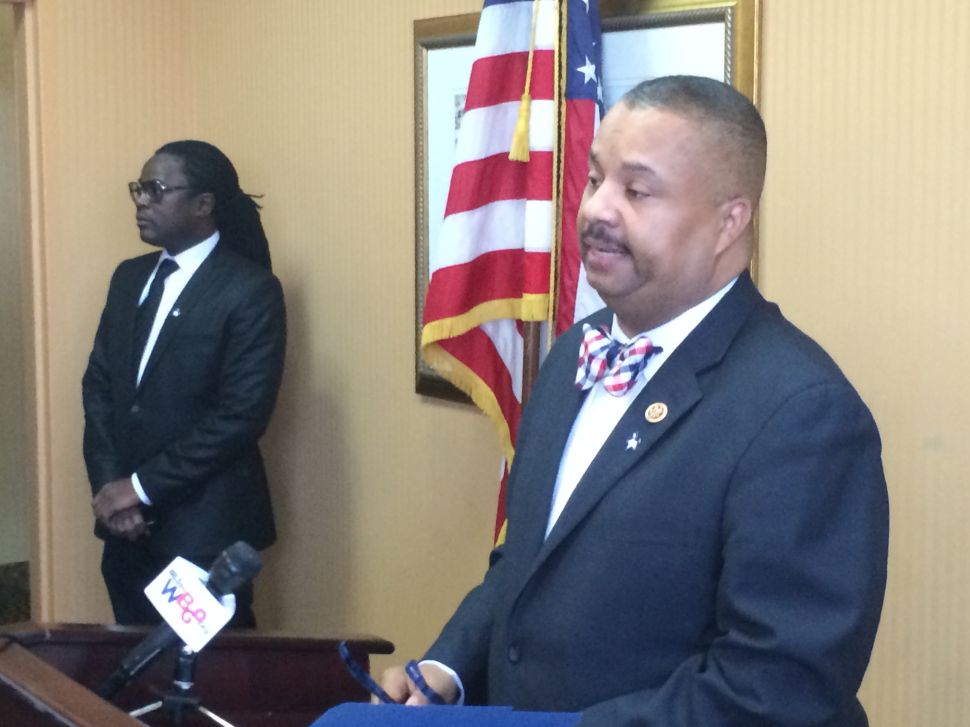