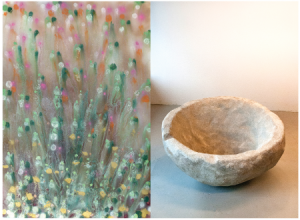 Works by Higgins and Occhionero. (Courtesy the artists and Kristen Lorello)

The address 195 Chrystie Street, between Stanton and Rivington Streets on the Lower East Side, has been home to a practice space for the No-Neck Blues Band, the very tiny gallery Art Since the Summer of ‘69 (which billed itself as “the smallest gallery in the world”) and, recently, a branch of Eleven Rivington. Now it’s getting a new gallery, an eponymous operation by Kristen Lorello, a former associate director at Eleven Rivington.

She is starting modestly. Her space, which opens April 17, is on the sixth floor of the building, just off the elevator, and measures about 165 square feet. “I had a collector ask me recently if there was a bathroom, because he was worried it would take up half the space,” Ms. Lorello said. (There’s not, but there is one nearby in the building, for the record.) On the plus side, the location is solid: the New Museum is directly behind the address.

Ms. Lorello’s first show is a two-person outing from Brooklynite Rachel Higgins and Rome-based artist Giacinto Occhionero. (The dealer spent time in Italy on a Fulbright so there is likely to be an Italian contingent to her program). She’s starting out with Scott Alario, Goldschmied & Chiari, Giacinto Occhionero and Josh Slater on her roster.

Before going into business herself, Ms. Lorello worked at both Eleven Rivington and Greenberg Van Doren Gallery (now Van Doren Waxter Gallery) and most recently earned a master’s in art history from Hunter College. She’s curated shows at Louis B. James (“Touch the Moon,” which closed in January) and GVD.

Why start a gallery now? “I wanted to implement my vision rather than work as a director at a gallery,” Ms. Lorello said. “It was time for me to carry my vision out.”