The Portuguese, Spanish and English-speaking media came to question Nieves, 46, on the day he declared his candidacy for the East Ward council seat, joining a crowded field looking to take out 16-year incumbent Augusto Amador in this multicultural, multilingual neighborhood. But it was Nieves who began questioning Amador’s record.

“There is a feeling of dissatisfaction, and also of desperation,” Nieves said. “Crime in this ward is out of control. There is a huge lack of city services. For a ward as taxed as heavily as [the East Ward] is, we’re not getting our fair share of police protection or economic development that creates good paying jobs. Our kids are not safe going to school. This community has always been about safety and about working families. As the representative of this ward, and we pay such a big share of those taxes, then where did those dollars go?”

Nieves’s opening campaign salvo makes him a part of a four-person posse taking aim at Amador, who was first elected in 1998 in a wave of Portuguese-American pride. But while the Portuguese-speaking population has economically and politically dominated the Ironbound, which largely comprises the East Ward, for generations, Nieves noted that other voices need to be heard in a changing neighborhood.

“The East Ward has many communities within it that have been ignored for a long time,” Nieves, a businessman who was born in Puerto Rico and has a Portuguese-American wife and two young children, said. “We have a large Latino community here. We have a large African-American community here. The councilman has to be a councilman for all the people. He can’t be just for a select few.

“You need a fresh pair of eyes to deal with these problems. Mr. Amador has been in for 16 years, but if you’re in any position for that long, you stagnate,” Nieves added. “If there is no change and no new ideas, you stop seeing the problems.”

Among Nieves’ policy positions are officeholder term limits and increased oversight regarding how police department funds are spent, as well as a more aggressive search for federal grant money to aid police efforts. Nieves’ plan is seconded by Capt. Inez Gonzalez, a 24-year veteran of the Newark Police Department now on terminal leave, who has signed on as Nieves’ campaign manager.

Americo Seabra, one of the Portuguese-born owners of the Seabra’s supermarket chain and the uncle of Jonathan Seabra, explained why he believes that Amador, who was also born in Portugal, is facing increased competition in the May municipal election.

“[Amador] made a promise to serve two terms, and he’s been here 16 years,” Seabra said. “Our community has changed. That’s our East Ward today. It’s about who is the right candidate, and I believe all of the candidates are great candidates against Mr. Amador.”

Several notable New Jersey politicians and power brokers who have either been governor, run for governor, want to be governor or who help to install governors have converged on the Newark mayoral race. Powerful statewide political forces have lined up behind Newark mayoral candidate and South Ward Councilman Ras Baraka and the other major mayoral candidate, former Assistant Attorney General Shavar Jeffries. While an alliance of Jersey City Steve Fulop, former Governor and current State Senator Richard Codey (D-27) and former Democratic gubernatorial candidate Barbara Buono have recently lined up behind Baraka, other political players are reportedly moving to back Jeffries.

These sit-downs suggest an alliance between North and South Jersey to ensure Jeffries’ victory in the upcoming election. Norcross is also a close ally of State Senate President Steve Sweeney (D-3), the potential South Jersey blocker of the gubernatorial ambitions of North Jersey’s Fulop. Amador has endorsed Jeffries for mayor and is the East Ward candidate on Jeffries’ council slate.

The incumbent East Ward councilman could not be immediately reached for comment about his re-election effort.

Neither Nieves nor any of the other East Ward candidates are on Baraka’s council slate. While Nieves left the door open to potentially joining the Baraka team, he told PolitickerNJ.com that he knows all of New Jersey will be watching Newark’s municipal election this year.

“The election in Newark, both for council and mayor, has become a referendum on the governor’s election. And not just the governor, but the County Executive and future [state] Assembly seats,” Nieves said. “The councilperson for the East Ward should play a major role, because we have to be able to go to the state, county and local levels to get our services. If you want the vote from my community, you’re going to have to bring tangible, quantifiable services to the East Ward.” 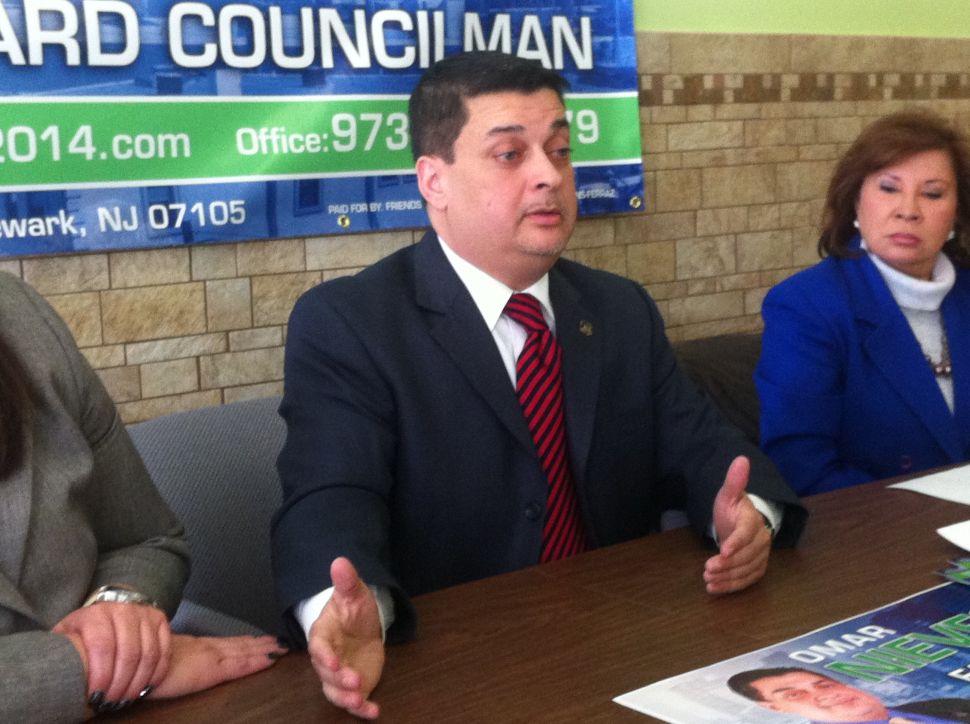