It might happen at a grocery store, it might happen in your living room. You reach out for some banal task, something you’ve done a thousand times before, only this time, it’s impossible. You’re body freezes, your mind locks up and a thousand horrible failures swirl around in your future . You don’t know how, but it’s all gone wrong, so quickly. Normalcy is lost to the ether. You look around you. You know that nobody else feels this way. They just do things. It looks so easy. And my god, they’re all looking at you because they know.

The rest of us struggle to pin down our anxieties — for someone like Octodad, they come from a very real place. He has no bones and is an octopus.

Octodad: Dadliest Catch, out for PC and soon for PS4, is one of those rare games that feels like it’s actually about something. And not just about something in the way that a shooter might shoehorn some philosophical musings in between blasting apart waves of faceless enemies. It began as a student project before developing into a retail game made by a company that lists only nine employees on its website. It’s captured the attention of the video game industry, from Sony execs on down to lowly bloggers. That’s because it’s one of the brightest, most interesting games I’ve played in years.

As Octodad, your life is not complicated, except for the fact that it is. Your tasks are the stuff of everyday life. You wake up, go down to the stairs, make some coffee and bring a glass of milk to your daughter. One mouse button controls one leg, one controls another, and you have to switch back and forth between your arms and legs using the mouse wheel. Try to put it all together, and it’s a Kafkaesque nightmare. That’s the real trick of Octodad — for some games, the controls are a necessary evil, a small piece of gamely unreality that the player accepts as a way to interact with the game world and moves on. In Octodad, the purposefully obtuse way of manipulating the protagonist is the main point.

You find yourself reaching feebly for a kitchen cabinet with one floppy arm, knowing that you’ll need to reposition yourself to get the coffee inside, but also knowing that switching to your legs to do so is bound to knock over the table, smack into your wife, or who knows what else. Each additional task is an exercise in panic.

One moment in the game’s tutorial level lays the game right out. It’s your wedding day, and you’ve successfully gotten dressed. No small triumph! You make your way to the chapel and your fiance is at the altar. You can feel the eyes of everyone in the audience upon you. The aisle is lined with some easily-knocked down decorations. Failure is all but inevitable.

It helps that Octodad is hilarious. As the old saying goes, you can’t put a bright yellow Octopus in a three-piece suit and then ask him to mow the lawn without eliciting at least a few chuckles. We’re not just struggling through the pain that is Octodad’s existence, we’re sharing in the triumph he feels just being alive. He holds an apple up to the screen with an Octopus’s smile worthy of a Tim Burton movie. He got the apple! Anything is possible.

Octodad stumbles about halfway through the game, when the team leans less on the bizarre premise that made the game so interesting and forces Octodad to do more normal video game things — when just moving is near impossible, sneaking around undetected is not only prohibitively difficult but decidedly. Worst of all, it gets away from some of those basic underpinnings that make the game so magical in the first place.

The games industry is not always the most encouraging place. The sophomoric strangeness (and violence) of Grand Theft Auto 5 somehow qualifies as biting satire and yields a payday in the billions, Call of Duty grows more troublingly jingoistic every year, and the relative difference between 30 and 60 frames per second subsumes the blogosphere for days at a time. Literally broken games get nominated for awards. You play a game like Thief, a massive, unfocused and troubling blockbuster where you can feel the pain and failed relationships of hundreds of coders worked to death to no end.

And yet! A company of nine people made Octodad. Others just worked part time. All of them, we hope, and we feel through their work, brought some strong measure of love to what they made. It’s hard In Octodad we have a thing that is not a movie, is not a novel, and is not a shooting range. It is a game, through and through, triumphant in form, style and substance.

The world of indie games has come a long way since games like Braid and Limbo first exploded onto the scene, forcing audiences and critics alike to recognize what small teams were capable of. Advances in digital distribution, middleware that streamlines the development process, and perhaps most importantly, audience taste have only gotten better, allowing developers to take the sort of strange risk that yields something like Octodad. Big companies have taken notice too — both Microsoft and Sony have gone out of their way to push indie games to their new platforms. It’s hard not to feel like something is going right when we imagine a Sony suit from Tokyo or Santa Monica, controller in hand, just trying his best to make hamburgers and flailing around like a joyful fool. 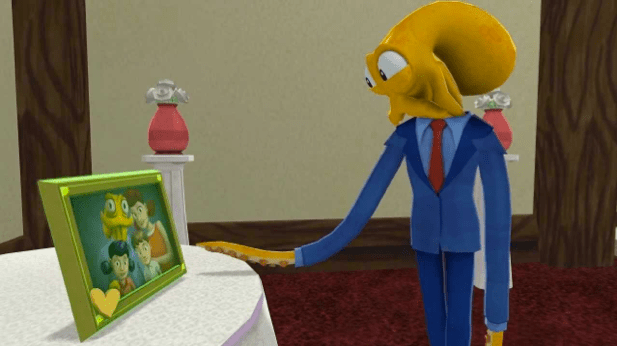